It’s another week of football in the books, as we creep closer to the playoffs.  Teams are jockeying for position and injuries are piling up.  There are a number of pivotal games on the NFL Week 14 slate.  Ravens-Chiefs, Eagles-Cowboys and Rams-Bears are the first three that come to mind.

Now, here we are, creeping through the holiday season and the primary window for holiday parties.  We just aren’t hosting any intergalactic keggers here.

This is business.  OK, not really. 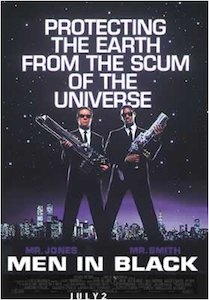 It’s fun, which brings us to this week’s theme, Men In Black.

As the tagline states, “PROTECTING THE EARTH FROM THE SCUM OF THE UNIVERSE” – and I’m pretty sure they had the SportsChump in mind when writing that.

But that’s what these picks are primarily for – to showcase football predictions, creativity at TWHS – and most importantly, to top the SportsChump in this year’s pick ‘em contest.

“You know what the difference is between you and me?  I make this look GOOD.”

Enough of the jawing with that guy, let’s talk pick research.  Adding to some of my past analysis, you’ll see that I also took time to look at how teams have performed against the spread this year (ATS – on the road and at home).  The weather, despite Winter Storm Diego, does not appear to have much of an impact on games.  Injuries, meanwhile, will have a major impact on this week’s picks.  But hey, you guys are smart, you can figure all this out, right?

Edwards: Why the big secret? People are smart. They can handle it.

Kay: A person is smart. People are dumb, panicky dangerous animals and you know it.

On second thought, maybe you should check these out.  Here are MY FIVE LOCKS for the week, with my NFL Week 14 WINNERS against the spread in RED.

People aren’t high on this game.  Maybe it’s the Raiders staying within seven of the Chiefs last week.  Perhaps it’s Pittsburgh using the Samuels-Ridley combo in the backfield.  Maybe it’s the fact that the Steelers are just 3-2-1 ATS as a road team this season.

Still, dive deeper.  The Steelers lead the league with 41 sacks, while the Raiders are dead last with ten.  Oakland has also allowed the fifth most sacks (39), while Pittsburgh has allowed just 17.  That’s “NYPD”.  Uh, what?

Jay: [holds up his badge] See that? NYPD, means I will Knock Your Punkass Down!

Got it.  So, Big Ben (AGENT B) is going to have all the time in the world, while Derek Carr is likely to be running for his life.  Roethlisberger also faces a Raiders pass defense that has allowed 29 TD’s through the air (with just 9 INT’s).  Give me the Steelers to cover big on the road.

The Bills are the “noisy cricket” of the NFL.  They don’t look like much, but there are times when they can really pack a punch.  Place that defense in front of the “Bills Mafia” and they often take it to another level.  Offensively, Josh Allen is starting to figure it out, being a threat through the air and on the ground.  Zay Jones (AGENT Z) is now his clear top wide receiver, with thirteen targets last week.

A few weeks back, Buffalo thrashed the Jets in New York.  Now, the Jets have to face the league’s number one pass defense (187.2 ypg) on the road.  The key will be whether New York can establish a consistent run game – and yeah, I just don’t see it.

Kay: [notices Jay is pointing the gun in his direction] WHOA! kid…

There’s no breaking the Bills Mafia.  Those unpredictable Bills cover at home.

For weeks, the strength of the Redskins has been its defense.  The offense battled injuries and struggled to put points on the board.  Last week, the injuries got too big, forcing Mark Sanchez into the starting QB role.  Sure, Sanchez has had a week with the first team, but the O-line is still depleted, as is the WR core.  Adrian Peterson and the run game could only get going on one carry last week.  That was Monday night, which also means the ‘Skins are playing on short rest.  The defense is wearing down and not the same group it was weeks back.

Then, there’s the Giants, who play in close games and have been better in recent weeks.  New York is actually 5-1 ATS as a road team this season.  I expect a strong day from the Giants offense, especially from Saquon Barkley (Agent S).  Sanchez and Co. simply can’t hack it, leaving another lost season for the Redskins, where every D.C. fan wish they could be “flashy-thinged”.

The Redskins are heading for 6-10.  Meanwhile, the Giants cover on the road (again).

Is this the same offense with Spencer Ware anchoring the ground game?  Also, Kansas City teams of the past tend to fade a bit down the stretch.  Don’t get me wrong, they are still great, but the Chiefs managed just a seven point win over the Raiders last week.  It’s a legitimate question.

James Edwards: Boy, Captain America over here! “Best of the best of the best, sir!” “With honors.” Yeah, he’s just really excited and he has no clue why we’re here.

Only, we know why we are here – a pivotal game in the AFC race.  K.C. is tough to beat at home, but as I said, there are questions.  Now, the Chiefs face Baltimore’s defense that is third against the run and second against the pass.  Baltimore’s pass defense has allowed just 16 passing TD’s.  Although, it has just five picks, so perhaps Mahomes can expose that.  Finally, it’s how a Chiefs defense can handle the RPO and talents of Jackson.

My gut says that this will be the week’s most entertaining game, and a close one.  Give me the Ravens and the points.

The Broncos have found a way to win some big games and stay in the playoff race.  There’s talent on this team, but the injuries are piling up, especially in the pass game.

“Your entire image is crafted to leave no lasting memory with anyone you encounter. You’re a rumor, recognizable only as deja vu and dismissed just as quickly. You don’t exist; you were never even born.”

OK, that’s a bit extreme.  But, Emmanuel Sanders tore his Achilles during practice this week, meaning the top two receivers of recent memory are out.  That leaves talented rookie Courtland Sutton (Agent C), who has been inconsistent.  Another rookie like DaeSean Hamilton will also need to step up.  But that inconsistency is likely to mean more focus on Phillip Lindsay and the run game.  San Francisco is actually pretty decent against the run – and playing at home, too.  It’s San Fran’s pass D (just two INT’s) that can be exposed.  But will catch all the passes?

Yeah, this one could be a nail biter (or just ugly).  With the injuries and open questions, give me the 49ers and the points at home.

I’ll hold off on the neuralyzer until after Sunday.  Hmm, unless I go 5-0, then these can live on forever.  Either way, thank you for reading The Wife Hates Sports!