NFL Week 11 Picks: No Excuses, Play Like a Champion

We are hitting the stretch run.  “No excuses, play like a champion”.

That’s Rule #76 – that is, if you’re following the rules of Wedding Crashers. 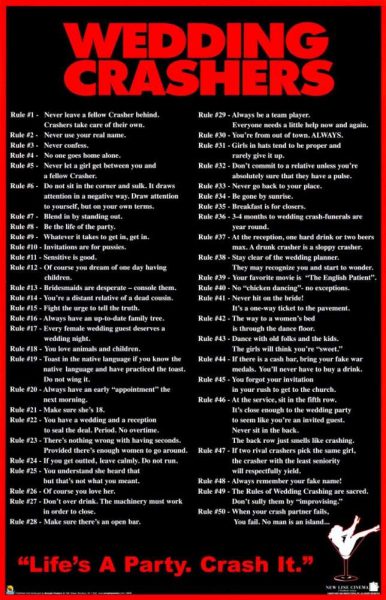 The Rules of Wedding Crashers

“Rule #1 – Never leave a fellow Crasher behind.  Crashers take care of their own”.  Sorry, SportsChump, I appear to be leaving you behind in our NFL pick ‘em standings.  Okay, okay… “always be a team player”, that’s Rule #29.  Like the rules and love that movie?  Check out the full list (see right).

Like rules in general?  No?  Well, how about some general rules to picking NFL games against the spread?  Yeah, YOU LIKE THAT (said in emphatic Kirk Cousins voice), don’t you?!

Here are a few rules to consider when making your picks:

Sure, Vegas takes a lot of this stuff into consideration, but these simple rules can still help push you over the edge regarding which team to pick.

With that said, here are MY FIVE LOCKS for the week, with my NFL Week 11 WINNERS against the spread in RED.

This seems risky on paper, yet here I am, giving this game my highest confidence of the week.  You saw the Steelers completely dismantle the Panthers last week, right?  Yeah, me too.  We have seen the Jags on defense this year, as well.  That was the strength of last year’s team that beat Pittsburgh twice and forced Big Ben into Nathan Peterman-like performances.  This year?  Try five straight games of allowing 20 or more points (three at 29+).

Let’s check the home-road splits: Pittsburgh is 3-0-1 on the road while the Jags are just 2-3 at home.  OK, what about some other kind of motivation?  James Conner is healthy (no concussion) and having a great year.  Le’Veon Bell is officially done in Pittsburgh and the raid of his locker has only appeared to bring the Steelers closer together.  Le’Veon did it for the money, guys, not for “uh, investing in companies that are ethically and morally defensible”.

OK, I feel better about this game again.  Steelers cover on the road.

The injuries just keep piling up for the Redskins.  The offensive line is patchwork, as Washington eagerly awaits the return of Trent Williams.  Chris Thompson and Jamison Crowder are also out.  “Yeah, we lost a lot of good men out there.“  Translation: Alex Smith will have no time to throw and few starters to throw to.  The Texans, meanwhile, come off a bye and should be rested and ready.  Demaryius Thomas has had more time to get acclimated to the offense.  A solid defense, highlighted by J.J. Watt, should spend plenty of time in the backfield chasing Alex Smith.  Washington’s defense is solid, but will burn out by the second half.  Why?  Because, well… “we lost so many good men out there”.

This ain’t the French Foreign Legion – or the Yankees.  Texans cover on the road.

The Cowboys must feel rejuvenated following a big win over the rival Eagles last Sunday night.  One big bird down, and the Falcons are next.  Speaking of Atlanta, the Falcons followed a dominating win over Washington with an ugly loss to the Browns.  Dallas fans must be thinking: “Let’s go kill some birds. I’m psyched”.  Go ahead and torch our top ten pass defense and shut down our new number one receiver, Amari Cooper.  That’s the Dallas fans speaking – not me.

I’m not sold on Dallas, if you couldn’t tell.  I’m not sold on Atlanta, either.  However, the Cowboys are 1-4 away from home and the Falcons are 3-2 at home.  The key lies with Atlanta’s D.

The quail population is overpopulated.  On Sunday, the falcon population will be, too.  Give me a big day from Julio Jones and Matt Ryan, as the Falcons cover at home.

Warning: Video contains language and is not appropriate for all audiences

The Cardinals hung with the Chiefs last week, which is a positive sign.  David Johnson had a strong week against KC and Josh Rosen is growing in the QB role.  Toss in Arizona’s top five pass defense and home field advantage, and well, there’s a lot to like here.

The Raiders, on the other hand, well… not so much.  Hey, Oakland, “It wouldn’t kill you to play some competitive sports, once in a while”.

Oh, and by the way, the already atrocious Raiders will be without Jordy Nelson and Martavis Bryant in the pass game.  I mean, honestly, the SportsChump could try out and make the team.

Warning: Video contains language not suitable for all audiences

ONE – Cincinnati Bengals at Baltimore Ravens (-4.5)

“Crab cakes and Football. That’s what Maryland does!”  C’mon, guys, you knew this one was coming.  And yes, I was waiting to use Wedding Crashers during a week when I picked the Ravens.

As for the game, this isn’t the time for a “Flacco is/isn’t elite” debate.  The Baltimore QB is doubtful and unlikely to play.  That leaves rookie QB Lamar Jackson and RGIII (or as I used to call him with the Redskins, RGIII-and-out) splitting reps in practice.  This leaves open questions, with Jackson likely to start.

Meanwhile, Cincinnati is last in total defense (454.6 ypg allowed).  A.J. Green is out again, which hurts a Bengals pass game that will face a Baltimore defense that is third against the pass.  So, in the end, cook up those crab cakes.  Maryland style only.  Ravens cover at home.

Hope you didn’t audible out of reading this NFL Week 11 post.  If you’re still here, thanks for sticking around and as always, thanks for reading The Wife Hates Sports!