It’s Thanksgiving week and that means it’s time for NFL Week 12, featuring three awesome rivalry games on turkey day: Bears-Lions, Redskins-Cowboys and Falcons-Saints.  There’s a ton of tradition there.  So much that with a slate like this, it won’t just be a second helping of stuffing and cranberry sauce that we’ll all have on this day.

That brings me to a conversation that THE WIFE and I had the other day regarding Thanksgiving and establishing family traditions.  We debated.  So, I ask you first, what are your family traditions for Thanksgiving?  Is it shopping on Black Friday?  Decorating for Christmas?  Going to a movie?  Watching a specific movie?  All of the above?  Something completely unique?

We debated all of the above and when we hit the movie topic, we hit a bit of a snag.  Then, we 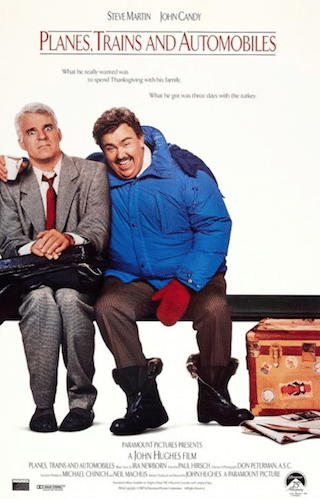 shifted to movies and Thanksgiving itself.

Turkey day gets a raw deal.  It’s overlooked between Halloween and Christmas.  The stores overlook it.  Commercials overlook it.  What about movies?  What famous movies are out there that solely focus on Thanksgiving?

Well, there actually are a few classics, believe it or not.

My personal favorite is Planes, Trains & Automobiles.  A man (Steve Martin) encounters many struggles simply trying to get home for Thanksgiving.  His companion along the way is a quirky slob (John Candy) that drives him completely crazy.  Hilarity ensues.

That’s the theme for the week, a man struggling to travel for Thanksgiving.

This is a man that struggled to deliver in last week’s picks.  Vegas was a fiendish little devil, with so many lines (including most of my picks) being near misses.

Sticking with the theme, I’ll stick with the travel and focus on the road teams.  I’m also focusing on Thanksgiving road teams.  Yes, even with Chase Daniel and Colt McCoy starting.

But I’m not betting against the Saints – c’mon, I’m not THAT crazy.

With that said, here are MY FIVE LOCKS for the week, with my NFL Week 12 WINNERS against the spread in RED.

Both teams come off a bye, which gives these two major markets plenty of time to spread a ton of stories in the media.  With the Patriots, there is no panic.  In New York, it’s a different story.  Todd Bowles and his job security are a major headline at the current time.

Enter a pivotal AFC East rivalry with the well rested Patriots.  Sam Darnold (foot injury), meanwhile, is not practicing and could miss another game.  Plain and simple, do the Jets have the horses to keep up with New England?

“Was that seat hot or what? I feel like a Whopper. Turn me over, I’m done on this side. I’m afraid to look at my ass. There’ll be griddle marks.”

Fire up that resume, Todd.  The Patriots cover big on the road.

The real question is simply, how will the Jags respond after a heartbreaking loss to the Steelers last week?  Jacksonville appeared to be back, at least on defense.  A wasted opportunity is gone, but there’s still time to recover.  Enter the Bills and a game that is certain to be a defensive battle.

Let’s start with the pass defense.  Buffalo is first in the NFL (202.4 ypg allowed) and the Jags are third (210.2).  So, good luck throwing.  “We’d have more luck playing pickup sticks with our butt-cheeks”.  Add in the Bills being dead last in passing offense and 3rd in sacks allowed (34).  “You’d have more of a chance to find a three-legged ballerina”, well… yeah, you get the idea.

Toss in Leonard Fournette, who has 52 carries over the last two games and I see the Jags wearing down the Bills defense over the course of the game.  Give me the Jaguars to cover on the road.

There’s one piece of Pittsburgh’s success that does not get enough attention.  The Steelers have allowed the third fewest sacks in the NFL (14 in 10 games).  On the flip side, the Pittsburgh defense leads the league in sacks, with 37.

Neal: [on tequila and Doritos] “What do you think? You think this is a good combination?”

Even so, Denver has tons of talent on defense, especially in the trenches.  Yet, the Steelers have such a lethal combination of weapons on offense, with Big Ben, James Conner, Antonio Brown and JuJu Smith-Schuster.  Sure, the Broncos do come off an emotional last second win against the Chargers last week, but can they replicate such a performance two weeks in a row?

I personally don’t think so.  Steelers cover on the road.

The Alex Smith injury was ugly… and creepy, considering it happened on the same day as Joe Theismann’s similar misfortune (just 33 years later).  Now, it’s the Colt McCoy show.  Everyone is handing the division to the Cowboys, saying the injured Redskins are headed in the wrong direction.

Before you dismiss the pesky ‘Skins, McCoy knows the system and the offense.  He led the Redskins back against Houston and nearly pulled out a win.  Sure, the majority of the offense is dinged up, but don’t discount the Redskins defense.

Look at the Thanksgiving history.  Dallas is 30-19-1 lifetime on turkey day, while Washington is 3-7.  But consider this: the only lopsided win for Dallas was on October 14, a 40-7 victory over the Jags.  Every other victory has been by a touchdown or less.  I’m banking on that.  Also, despite all the injuries, the Redskins continue to find a way to stay in games.

I really like Washington’s defense, so give me the Redskins and the points on Thanksgiving.

ONE – Chicago Bears at Detroit Lions (+3)

Mitch Trubisky is doubtful to play, which makes this less likely, considering Chase Daniel is now a good bet to start for the Bears.  Yet, looking at the rest of the slate, I still like Chicago.  Well that, plus the Bears are mentioned in one of the key movie quotes for this post (see below).  In all seriousness, the world knows what Chicago did to Minnesota’s stronger offense last Sunday night.  The Bears defense has an NFL-leading 18 INT’s and is 5th in sacks, with 32.  Khalil Mack is a one-man wrecking crew.  Matthew Stafford could find himself on the ground between two pillows –  wait… “those aren’t pillows!”  Those are defensive linemen!

The Lions are 37-39-2 on Thanksgiving.  Sure, the Bears are playing on very short rest and Chase Daniel is likely to be the starting QB.  But for Detroit, both Kerryon Johnson and Marvin Jones are out, too.  That spells too many question marks for a Detroit offense facing a very solid defense.

Because of all these factors (and the fact that the movie clip follows the pillow panic with a lot of positive talk about the Bears), give me Chicago to cover on the road.  In Chase we trust.

Who do you have as your NFL Week 12 locks?

No need to track down your _______ rental agreement.  Instead, just have a safe and Happy Thanksgiving – and thank you for reading The Wife Hates Sports!