Visitors to The Wife Hates Sports know that this is a sports site with a tendency to dabble in the entertainment world from time to time.  What better way to tackle the entertainment industry than with predictions for the 2017 Oscars?

Nothing symbolizes Hollywood more than the Oscars, which is why yours truly will go head-to-head against THE WIFE in hopes to achieve gender domination for at least one insanely overdressed evening.

That and maybe a nice dinner coupled with a glass or two of chianti.

Watching the Academy Awards is a tradition in our house and here’s hoping this man reels in another victory and keeps my unblemished Oscars record intact.

Yes, I said “reels” – oh, the puns never end in my humor-challenged world.

So, while the 2016 Oscars are likely to feature some anti-Trump speeches and “fake news” jabs, The Wife Hates Sports will focus on the key awards and make the standard predictions we make every year.

Feel free to chime in with your own picks, thoughts and opinions.  Heck, your prognostication may just be better than ours, considering we’ve only seen a handful of this year’s movies.

KP’s Take: “Can’t Stop The Feeling” just might be the song of the year (and last year, too).  J.T. is just so catchy and talented, but that doesn’t mean the song is an Oscar winner.  While many of us would vote for this Troll-tastic jingle, this is likely to be the beginning of a dominating night for La La Land. 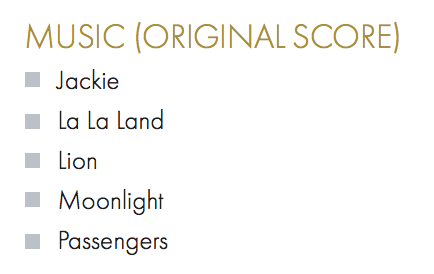 KP’s Take: Again, La La Land is a critically-acclaimed musical nominated for best picture, so it makes too much sense that it would also run away with the top song and original score awards, too. 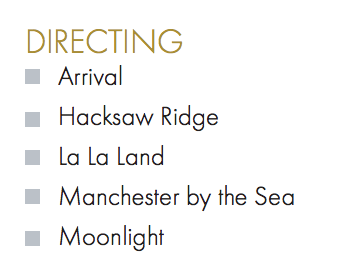 KP’s Take: After two straight wins, we don’t see Alejandro Inarritu in the mix.  It’s also interesting to see Mel Gibson’s return to the awards spotlight.  But in the end, I’m keeping these picks rather boring and picking Damien Chazelle to hoist the golden man for his directing of La La Land. 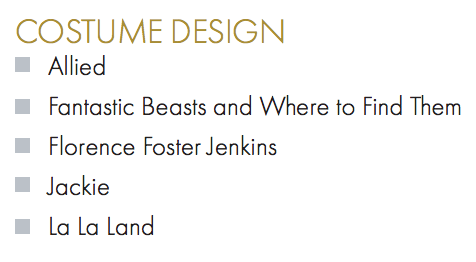 KP’s Prediction: Fantastic Beasts and Where to Find Them

KP’s Take: The unique period pieces almost always win in this category, and as always, there are numerous options to choose from.  The WIFE is going with Florence Foster Jenkins and I’m focusing on not so much a period piece, but the imagination of J.K. Rowling put onto the big screen.  Give me those fantastic beasts. 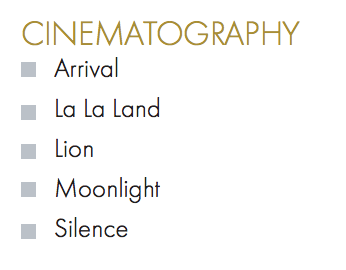 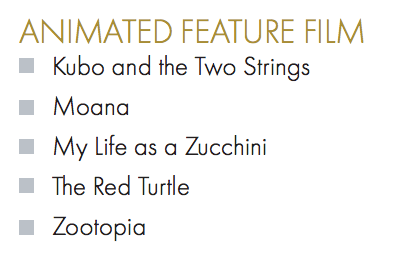 KP’s Take: No Pixar options in the mix this year, but there are two Disney flicks.  Zootopia is great and if I didn’t have a toddler, I’d probably have never saw it.  But this is an Oscar-worthy winner, with a great story that is chock-full of clever characters, old-school movie references and solid one-liners.

Actress in a Supporting Role 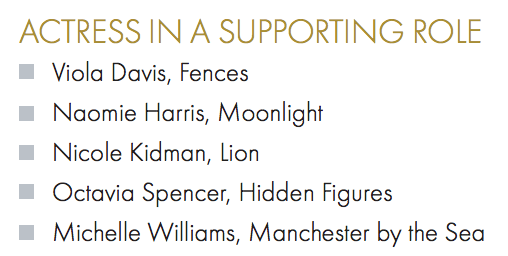 KP’s Take: It’s wise to vote for a role where an actor has to go through struggles, take on a disability or present a unique voice or accent.  Davis fits the role of a character dealing with family struggles.  More so, while this is a movie I want to see at some point, I have yet to do so.  Nevertheless, the trailer alone sold me on the performances of both Viola Davis and Denzel Washington.

Actor in a Supporting Role 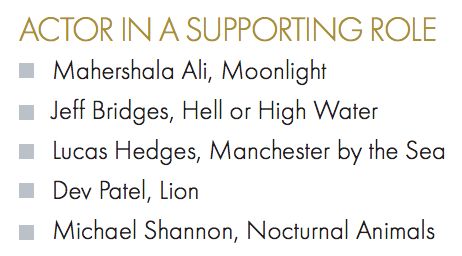 KP’s Take: Ali I believe took the Golden Globe in this category and while this should be a tight race, I’m betting on him to take this one home, too.

Actress in a Leading Role 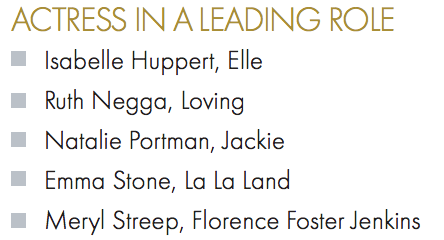 KP’s Take: The talented Emma Stone does it all in this film and I personally can’t wait to see what this genuine beauty has to say when she lands on the podium.  Yes, that’s how confident I am that she’ll win for her role in La La Land.

Actor in a Leading Role 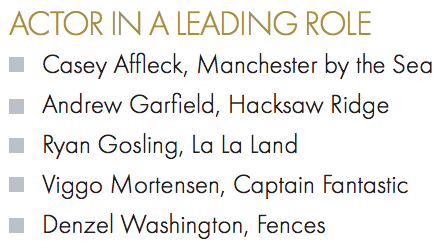 The Wife’s Prediction: Casey Affleck (Manchester by the Sea)

KP’s Take: This one doesn’t seem as clear-cut, despite Gosling getting nominated for La La Land.  I do consider him one of the favorites, but Denzel Washington leaves it all out there in every role that he takes on.  His passionate performance in Fences sure looks like it’s an Oscar winner. 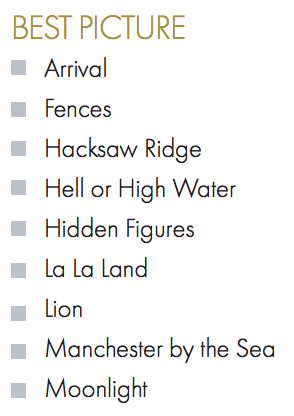 KP’s Take: For me, it comes down to Hidden Figures and La La Land, but as I mentioned from the start of this piece, I believe La La Land will leave as the big winner at this year’s Oscars.  THE WIFE, on the other hand, thinks that Hidden Figures will take home best picture – and to be honest, if it did, that would be great, considering its fantastic untold story that so many people have been raving about (and flocking to see).

Note/Credit: Screenshots of nominees (featured above) taken directly from the Nominee Ballot page, via the Oscars official website.