Fantasy Football is back.  Drafts are happening.  Whether the 2020 season can maneuver its way around the ongoing pandemic, that remains to be seen.  Sure, the summer heat is still here.  You can still fry an egg on the sidewalk where I live, but football games will soon invade streaming and television broadcasts.  As we creep closer to pigskin pandemonium, the Modern Day Fantasy Football Dad lives.

He is back in his element!

He cooks, he cleans… he also does none of that!  At least, not on Sunday.  Note: I may be sleeping on the couch for the foreseeable future.

He actually feeds the baby a bottle, while also watching NFL Sunday Ticket on TV and simultaneously juggling between both his DFS lineups and Fantasy Football teams.

Yes, as in plural and/or all of the above.  There are circus performers that have juggled a lot less.

This is a running joke in my house.  It started more than six years back.  Social media had already started to swallow our lives whole.  Screen time was increasing faster than you could successfully pronounce the name Tua Tagovailoa.  I used it to ingest as much football as my body and brain would allow.

As a result, THE WIFE created this term when I was a new Dad, essentially poking fun at my obsession with both football and Fantasy Football.  She took this picture and shared it in our social media circles. 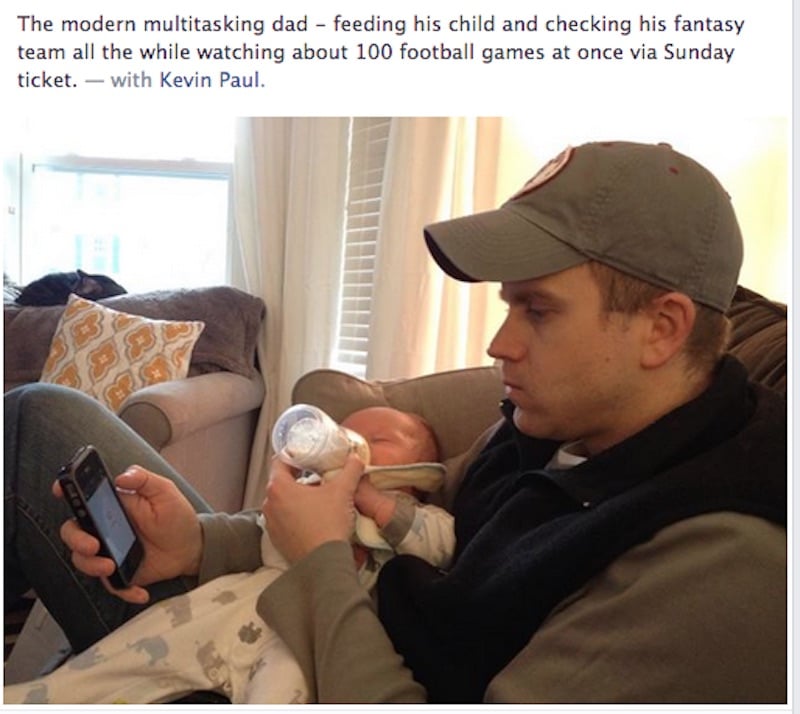 Can you tell I was sleep-deprived at the time?

Anyway, THE WIFE obviously doesn’t get it.  She doesn’t understand the added intensity that Fantasy brings to the games.  Her frustration is instead asking why I am obsessed with regularly checking the status of my Fantasy team or my DFS lineups.  Her hate for sports runs true here.

I explain that it’s the competition.  There is a bottle full of excitement injected into the games.  That’s especially true when your favorite team is struggling or not even sniffing the playoff picture (as mine has for so many years).  Fantasy Football resolves that problem and then if your Fantasy team stinks, Daily Fantasy allows you a clean slate each week.

Research is also needed to make your teams better (and for writing, too).

Upon stating these facts in a variety of ways, she would just stare blankly at me and say, “I still don’t get it.  Why not just wait to check after the games are over with?”

I recently stumbled upon the aforementioned photo and recalled my desire to include this as a part of the Wifetionary.  Sure, my son is now six years-old and well over four feet tall.  Despite that, this concept still lives and is something THE WIFE frequently brings up (just not the baby part).

Therefore, let it be added to the Wifetionary with the official definition:

Modern Day Fantasy Football Dad: The art of juggling baby and football, while using as much technology and Fantasy Sports as possible.  Warning: if baby is disturbed or becomes agitated and requires a shift to THE WIFE, this could result in additional chores and less football.  Proceed with caution.

Celebrity Excuses for Not Attending My Super Bowl Party (2022 Edition)

Celebrity Excuses for Not Attending My Super Bowl Party (2022 Edition)

Microsoft Teams Custom Background: Be a Work from Home Hero

Microsoft Teams Custom Background: Be a Work from Home Hero