No wedding ceremony and reception is ever perfect.  The key is avoiding major nightmares and more importantly, following the celebration with an even better marriage.  Just avoid the “wedding fails”.  These are the two words that make every WIFE – or wife-to-be – cringe.

I tell younger friends not to stress about wedding plans.  Instead, just create a memorable party and a good time for your guests.  Some will travel a long way just to celebrate your special day.  This is a day that will be an absolute blur, but hopefully an absolute blast, too.

For example, THE WIFE and I never saw the top tier of our cake.  We don’t know where it went.  Maybe the staff cut it.  Maybe someone swiped it.  Either way, as you know, tradition states that you are to keep it for your first anniversary.  We did not get that luxury, but that’s nothing major.

Here are a few personal experiences that are a bit more cringeworthy:

A college friend was married and the DJ got the bride’s name wrong during introductions.  I’ll never forget the look and reaction from the bride’s mother.  Picture a hungry lion spotting a zebra or Joey Chestnut taking down a pack of hot dogs on July 4th.  Translation: the reaction wasn’t pretty.

’Til Drunk Do Us Part

I’ve also seen a married couple arrive late to the reception… hammered.  This eventually led to a make-out session during the first dance (right next to Grandma).  Then came the cake sharing.  We are talking a smashing of cake on each other’s cleavage.  Not surprisingly, that relationship didn’t last.

On a separate note (and a slight tangent), Rex Chapman – former NBA player for the Charlotte Hornets – has become one of the more popular and entertaining Twitter personalities in sports.  If you are a basketball fan, you may already know Rex.  He is becoming well known for his now viral “Block or Charge” tweets.  It is a clever spin on the basketball debate of whether a play should be a block call or a charge foul.  He instead posts videos of unfortunate fail events and simply asks his audience whether it should be a block or a charge.  Some are a bit scary, but most are quite funny.

To tie the two stories together, a recent “Block or Charge” from Rex Chapman turned out to be a major wedding fail – and therefore perfect TWHS fodder.  This is the wedding fail of all wedding fails.  It is a situation that you just feel really bad for THE WIFE.  First off, here it is:

Have a Nice Trip, See You Next Fall?

This video clip just raises so many questions:

I showed this one to THE WIFE and her response – while gasping – simply was: “Oh no.  Oh my!”.

“The makeup, the whole thing.  What if they hadn’t done pictures yet?”  These are all thoughts from THE WIFE and my Mom.  Then they piled on the best man, “I hope they like him”. 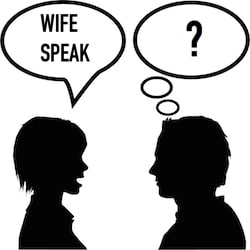 What personal wedding fails do you have to share?  If there are any that come to mind, please share, as it would be interesting to hear some reader experiences, too.

Until then, watch your step, folks!

Oh, and here’s hoping the couple from the video at least has/had their one-year anniversary cake in the freezer ready to be eaten in the future….by both of them.

By the way, my Mom and THE WIFE are still talking about that video.  See what I mean?  If there was a blunder at your wedding, at least it wasn’t this!

Don’t sweat the small stuff and as always, thank you for reading The Wife Hates Sports.