The Houston Astros and Los Angeles Dodgers are clicking on all cylinders, owning the top two spots of KP’s MLB Power Rankings, piling on the victories and landing north of the sixty-win mark at the 2017 MLB All-Star break.

No other team is really all that close, with the Arizona Diamondbacks (53-36) and Washington Nationals (52-36) having the third and fourth best records in baseball.

While the ‘Stros and Dodgers sit as the obvious favorites to reach the World Series, it raises the question: Who has earned the right to be named each team’s Most Valuable Player for the first half?

For that matter, of the teams landing in the top half of KP’s MLB Power Rankings, who is the most valuable player for each of those squads?

While the answer isn’t always that clear, cut and dry, let’s attempt to take a crack at it anyway, shall we?

The TOP 15 teams of the TWHS MLB Power Rankings are as follows, with MVP’s, side stats and key notes along for the ride:

Note: Statistics and point totals as of Wednesday July 12, 2017)

The Dodgers own the best record in baseball, but fall behind Houston in both road record points and team hitting marks.  Rookie Cody Bellinger (.261 avg, 25 HR, 58 RBI) has provided a real spark to the offense, but the MVP of the Dodgers is none other than Clayton Kershaw, who continues to anchor baseball’s top pitching staff (3.15 ERA).  Kershaw (14-2, 2.18 ERA, 0.88 WHIP) has the most wins in baseball, is second in ERA and third in strikeouts (159).

The Nats crack the third spot and have a number of players that deserve team MVP consideration.  Washington has four regulars with an average above .300, including Daniel Murphy, Ryan Zimmerman, Bryce Harper and Anthony Rendon.  But with the team’s well-known struggles in the bullpen, the Nationals MVP has to be Max Scherzer (10-5, 2.10 ERA, 0.78 WHIP, 173 K’s), who has saved the pitching staff on a number of occasions.

Many may think the Tribe are too high in these rankings, but Cleveland edged out the likes of Arizona, Boston and Milwaukee with its top ten ranked offense and pitching staff that owns the 3rd best ERA in baseball (3.78).  There’s an easy argument for either Corey Kluber or Carlos Carrasco as the team’s first half MVP, but this vote goes to Jose Ramirez (.332/.388/.601), who really sparked the offense, leading the team to a big winning streak and first place at the break.

It has been far from a flawless first half for Boston, yet the Red Sox own the 4th best ERA (3.82) in baseball and the 5th best batting average (.268).  Despite the occasional struggles, Boston also leads the AL East by 3 1/2 games.  As for the team’s first half MVP, it simply must go to Chris Sale (11-4, 2.75 ERA, 178 K’s), who was clearly worth the high price paid during the offseason.

The Brewers – and not the Cubs – have a 5 1/2 game lead in the NL Central.  As one of the clear surprises this season, Milwaukee also does not feature any clear-cut winners statistically.  Eric Thames (23 HR) had a red hot start, but is only batting .248.  Zach Davies leads the team with ten wins, but sports a 4.90 ERA.  One could argue that Travis Shaw (.299, 19 HR, 65 RBI) deserves to be named MVP of the team, but honestly, the designation should show to Chase Anderson (6-2, 2.89 ERA), who has emerged as the surprise ace of the staff. 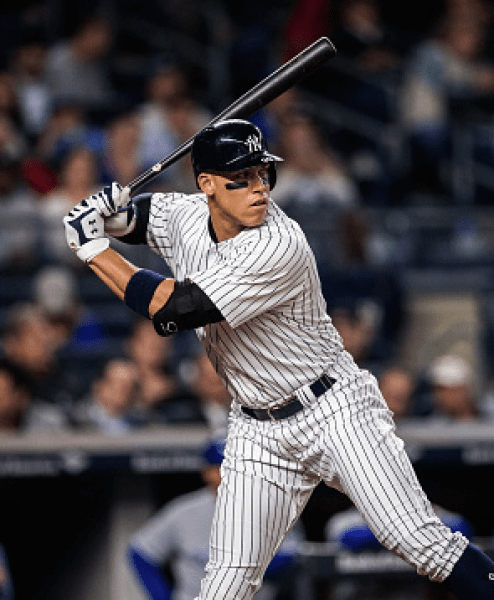 MLB Power Rankings: Aaron Judge is the MVP of the Yankees

Sure, Starlin Castro and Luis Severino are having nice seasons, but no one has captured the game’s attention more than Aaron Judge.  The rookie slugger leads the team in batting average ( .329), home runs (30), RBI (66), OBP (.448) and hits (99).  Each home run also gets sent into orbit.

The story in Colorado is always the offense, although the team’s pitching has improved a bit this season.  Still, a trio of bats – Charlie Blackmon, Nolan Arenado and Mark Reynolds – have all had great starts to the season.  Give the team MVP edge to Arenado (.301 avg., 17 HR, 70 RBI), who has also been brilliant defensively on the hot corner.

Chris Archer and Alex Cobb have been steady in the rotation, while Logan Morrison and Steven Souza Jr. have been strong at the plate.  But in the end, Corey Dickerson has been the most consistent, with a .312 batting average, .355 OBP, 24 doubles and 17 homers.

The Cardinals have been painfully bad at times, yet somehow statistically find themselves ahead of the Cubs, despite having the same record.  Picking an MVP for the first half is tough for the Cards, however.  Mike Leake, Carlos Martinez and Lance Lynn have all been solid in the rotation.  In the end, give a slight edge to Jedd Gyorko (.300/.364/.519) who is having his best season as a pro and been the steadiest bat in the lineup.

The offense has struggled to hit, managing just a .240 average, which is good for 27th in baseball.  Meanwhile, the pitching staff has fared a bit better, with a now healthy Yu Darvish being the clear leader of the staff, managing 13 quality starts and posting a 3.49 ERA.

Only the Astros, Nationals and Rockies have a better team batting average than the Marlins.  In fact, six regulars have a batting average at .277 or higher.  Marcell Ozuna has been arguably the most impressive, leading the team in average (.316), RBI (70), OBP (.374) and hits (107).

Because we all can’t look away from a train wreck, here are the least valuable players tied to the second half of the MLB Power Rankings (and the BOTTOM 15)

* All stats per MLB.com

The Wife Hates Sports MLB Power Rankings system has a method to its madness, attempting to be different and not just rank by popularity and record.  It mixes a secret formula of six completely different categories, meshed into a points system.  The categories don’t just include team results regarding record, but how each team has performed recently, as well as incorporating some statistics on both a team’s offense and pitching staff, too.