There isn’t a single person on this planet that had Tom Brady and Dak Prescott headlining the top-seeded teams in the NFL (and NFL Power Rankings) this far into the regular season.

But here we are, staring down one of the more intriguing stories in sports this season.

Prescott recently proved to be a tad human, struggling through most of last Sunday night’s showdown with the Eagles, only to right the ship in the fourth quarter and throw the game-winning TD to Jason Witten in overtime.

Through the first three quarters, the world expected the Tony Romo chatter to spike.

Instead, Prescott continues to shine and the former Mississippi State product’s success presents a beyond ideal situation to Jerry Jones, who has surprisingly handled everything quite well by not rushing Romo back (and also by not committing to him as the starter when he does return).

Then, there’s Tom Brady – and what can be said that already hasn’t been said before?

Led by Brady and Prescott, the New England Patriots and Dallas Cowboys take over the top two spots in the latest edition of NFL Power Rankings at The Wife Hates Sports.

The Patriots own a 22-point edge over Dallas, followed by the Denver Broncos in third, Atlanta Falcons in fourth and Oakland Raiders in fifth place.

The Minnesota Vikings – suddenly struggling and following a lackluster performance against the Bears on Monday night – slip out of the top five and land in sixth place.

Here’s where each team lands in the rankings after Week 8, featuring some stats, notes, thoughts and figures for every franchise in the NFL.

*Stats, records and information through Week 8 of the 2016 NFL season

Note: These rankings were compiled prior to Atlanta’s blowout win over Tampa Bay on Thursday.

It’s funny to think that some prognosticators actually felt Tom Brady would be rusty upon returning from his deflated four-game suspension.  Heading into Week 9, Brady has 102 Fantasy points (in my league’s format), which is more than the likes of Eli Manning, Joe Flacco and Russell Wilson.

Through the first seven games of his career, Dak Prescott – the 135th pick in this year’s NFL Draft – has 9 TD passes and just 2 INT’s.

The Denver pass defense continues to shutdown opposing offenses and the numbers don’t lie: 183.9 passing yards per game allowed (1st in the NFL), with more INT’s (8) than TD’s allowed (6).

Recently posting his fifth game with at least 3 touchdown passes, Matt Ryan deserves to be included in this year’s MVP conversation.

The GOOD: Minnesota’’s defense has allowed 20 or more points just twice this season.  The BAD: Both of those occurrences were in the team’s last two games (each road losses).

Russell Wilson has been a disappointment offensively this season, with just five passing touchdowns and 44 total rushing yards through seven games.

The injury bug is striking Kansas City hard, which could prove to be problematic in the strong AFC West division.  The weight of the offense now shifts to the shoulders of Nick Foles and Charcandrick West.

Why do the Cards crack the top ten with a 3-4-1 record?  Consider the following, despite Arizona’s other setbacks:  The Cards are 11th in passing offense, 13th in rushing offense and third in pass defense, allowing just 5 TD’s through the air. (with 9 picks).

Since his scorching opening month, Carson Wentz has cooled off a bit, managing just 4 TD and 3 INT over the team’s last four games.

Not often discussed is the Green Bay run defense, which is ranked 2nd in the NFL, allowing just 74.4 ypg on the ground (and a league-low two touchdowns).

Le’Veon Bell has been the top rusher in a game just twice this season, which is as many times as backup runner DeAngelo Williams, who led the Steelers in rushing during the first two weeks.

Kirk Cousins has thrown for 759 yards over the last two weeks combined and has managed four 300-yard passing games on the season.

The Bills are so lopsided offensively that it nearly averages as much on the ground (154.1 ypg) as it does through the air (179.4 ypg).

The Titans – led by a ground game featuring Marcus Mariota, DeMarco Murray and Derrick Henry – is third in the league in rushing, averaging 152.2 ypg.

The Giants are dead last in rushing offense with Shane Vereen – who hasn’t played since Week 3 due to injury – still the team’s leading rusher, with just 147 yards on the season.

Each of San Diego’s five losses has been by one score or less, with its recent 27-19 setback at Denver being the largest defeat of the season.

At the midway point, A.J. Green has already posted 59 receptions, 896 yards and 3 TD’s.  A 2,000 yard season is certainly not out of the realm of possibility. 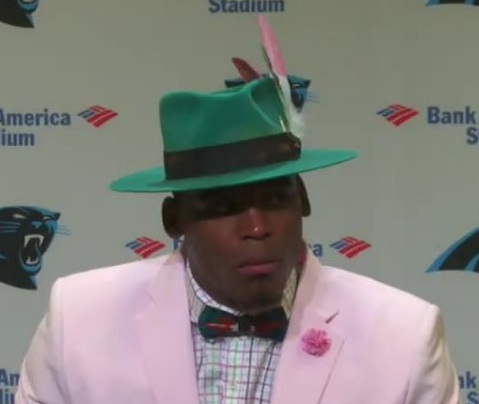 Carolina’s much needed victory over Arizona will make any critic not only forget about the first six games of the season, but also to space on Cam Newton’s strange post-game outfit that can only leave me thinking of Jim Carrey in ‘The Mask’.

How absent is Detroit’s run game?  Theo Riddick – who has missed time due to injury – is the team’s leading rusher, with just 227 yards on the ground this season.

The story of the Saints’ survival once again revolves around Sean Payton and Drew Brees.  The New Orleans passing offense leads the NFL in yards per game (326.9) and is second in touchdown passes, with 18 through seven games.

Jay Ajayi has put together one of the more remarkable statistical turnarounds in recent memory.  Consider the following numbers: Through Miami’s first five games, Ajayi posted just 31 carries for 117 yards and 2 TD’s.  Over the last two weeks, he’s managed 53 rushes for 418 yards and 3 TD’s.

Despite all the running back injuries, the Bucs still have managed 113.4 ypg on the ground, which is 12th in the NFL and a higher rank than the Cardinals, Broncos and Steelers.

Does anyone remember the days when people so freely stated that Andrew Luck would be better than Peyton Manning?  Despite Indy’s struggles, Luck is having a solid year, especially considering the league-high 31 sacks that he has endured.  Consider that fact, since Peyton never ate that much grass.

After a month-long cool down (164 rushing yards in four weeks), Matt Forte has rebounded, rushing 55 times for 182 yards and 3 TD’s over New York’s last two games.

Jay Cutler (20-31, 252 yds. 1 TD) made a triumphant return, surprising the Monday night audience and handling a Minnesota defense that had dominated through the opening six weeks of the season.

With so much promise heading into the 2016 campaign, Jacksonville’s offense has taken a nightmarish step back.  That goes double for Blake Bortles (12 TD, 9 INT) and Allen Robinson (32 receptions in 7 games), who have struggled with no support from the run game.

Just how bad has Chip Kelly’s passing attack and quarterback play been?  How about these heinous numbers: 68.6 passer rating (last in the NFL), 5.7 yards per catch (also last), 7 TD, 7 INT and you guessed it, an NFL-worst 161.4 yards passing yards per game.

This tweet from Halloween – which likely won’t be topped for the rest of the NFL season – describes the 2016 Browns perfectly, and all without the late-night sugar crash, too.

* All stats per NFL.com

The Wife Hates Sports’ NFL Power Rankings system has a method to its madness, attempting to be different and not just rank by popularity and record.  It mixes a secret formula of eight completely different categories, meshed into a points system.  The categories don’t just include team results regarding record, but how each team has performed on the road, as well as incorporating some statistics on both a team’s offense and defense, too.