A late surge by Martin Truex Jr. landed the #78 team its second victory of the 2016 NASCAR Sprint Cup season.  It was a positive sign for a team that had posted three sub-par finishes over the last five races.  With the win, Truex Jr. moves up one spot (to 7th place) in the latest edition of NASCAR Power Rankings at The Wife Hates Sports.

Kevin Harvick led 214 laps on the day and finished as the runner-up at Darlington, followed by Kyle Larson, Denny Hamlin and Joey Logano.

It was yet another strong performance for Harvick, who builds an even larger lead in the last NASCAR Power Rankings.  The runner-up finish marks the 20th time that Harvick has finished in the top ten or better this season.  He’s also had ten finishes in the top five and two victories.

Brad Keselowski continues to chase Harvick and remains in second place, followed by Joey Logano, who returns to the top three for the first time in weeks.  Denny Hamlin moves up one spot to fourth place, followed by Kyle Busch, who drops two slots to fifth.

Kasey Kahne is the biggest mover of the week, jumping three spots and into 16th place.

On the flip side, Kurt Busch falls three places to 10th and is the biggest loser of the week.  Tony Stewart also had a rough go, falling two spots in the latest rankings.

With just one race remaining until the Chase for the Sprint Cup, the NASCAR field next heads to Richmond for the Federated Auto Parts 400.

Next Up: Federated Auto Parts 400 at Richmond International Raceway on Saturday September 10th at 7:30pm ET 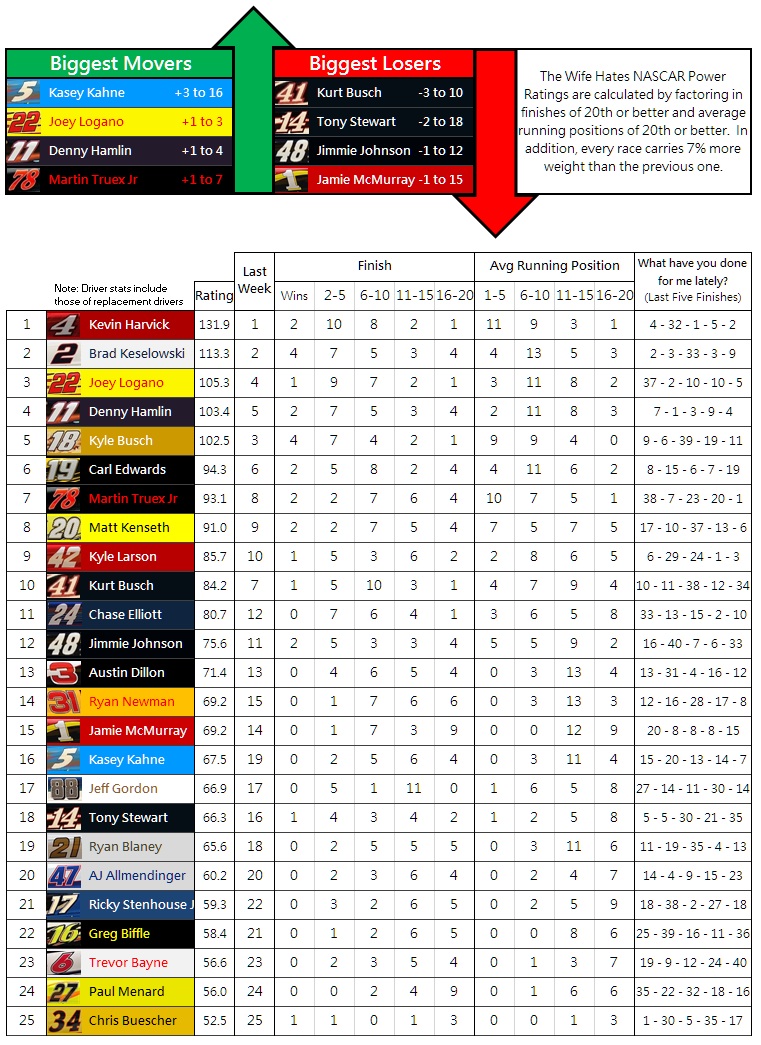