It was a relatively quiet week for NASCAR – like hearing a pin drop.  That’s when compared to Daytona and the dramatic Austin Dillon wreck at the Coke Zero 400.

It was so quiet, that Danica Patrick’s f-bombs could be heard for miles and miles.

Kyle Busch took the checkered flag at the Quaker State 400, landing in Victory Lane for the second time, and putting him one step closer to the Chase, despite an injury-shortened season.

Other than the Busch victory and Danica’s issues with Dale Jr., one could easily shift their eyes over to Kevin Harvick, who posted another top ten and continues to dominate the Sprint Cup field.

Harvick once again maintains a large lead in the latest NASCAR Power Rankings at The Wife Hates Sports – but he’s clearly not the story this week.

The rankings headline instead lies with the major shakeup behind Harvick, and the ongoing battle for second place.  In fact, this week’s 2nd through 6th place spots are separated by just nine ratings points.

Dale Earnhardt Jr. (21st at Kentucky) dropped four spots to sixth place and is the week’s biggest loser.  Replacing Junior in second place is Jimmie Johnson, who moves up one spot from third.

Kurt Busch (10th at Kentucky) jumps up a spot to third place, followed by Joey Logano (two up from 6th) and Martin Truex Jr.

Three drivers jumped at least three spots this week.  Trevor Bayne (up 4 to 23rd) was the week’s biggest mover.  Carl Edwards (up 3 to 13th) and Kentucky winner Kyle Busch also had strong weeks.

The Sprint Cup season shifts its sights to New Hampshire next week, but to be safe, let’s hold off on asking Danica what she thinks of it. 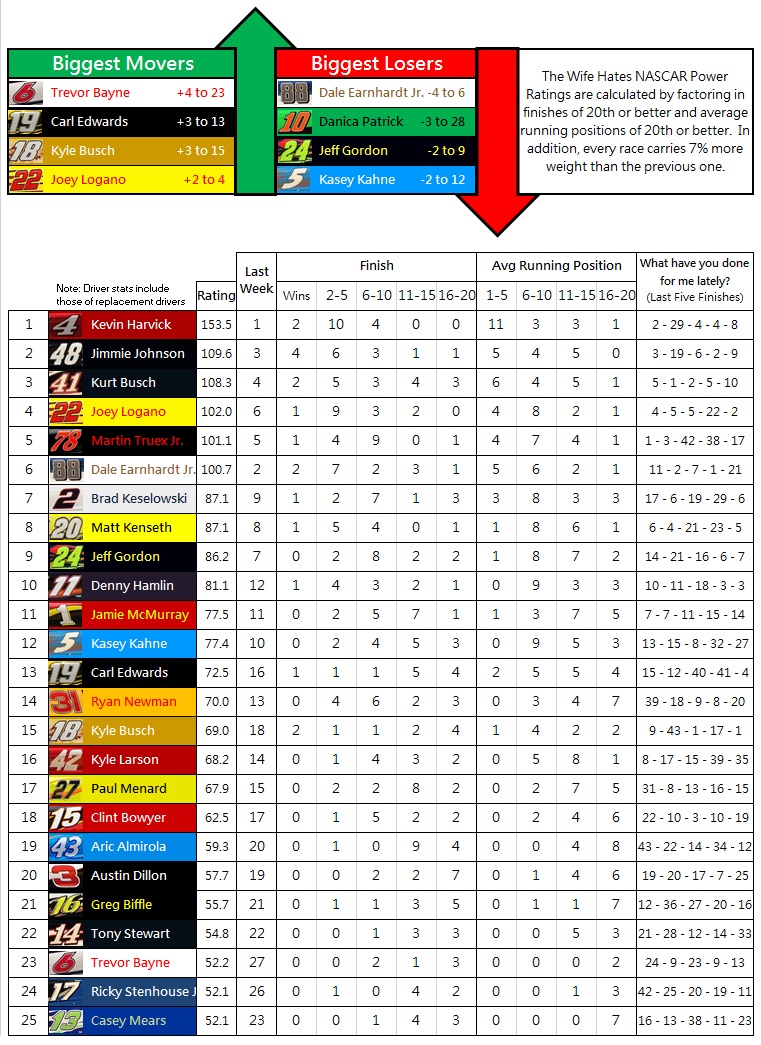