Skip to content
Home|Sports|NASCAR Power Rankings: Keselowski In, Earnhardt Jr. and Johnson Out

NASCAR Power Rankings: Keselowski In, Earnhardt Jr. and Johnson Out

What a difference a week can make for Brad Keselowski.

After the Charlotte race, which saw a 16th place finish, a post-race brawl and a $50,000 fine, many had already dismissed Keselowski’s title chances.

But after a furious finish at the Geico 500 over the weekend, Brad Keselowski escaped with the checkered flag and a berth in the next round of the Chase.

If Keselowski was as happy as Ickey Woods getting cold cuts at the deli, no one would have been able to tell during his post-race press conference.  At least, if you strictly go by his laid back demeanor.

While one contender finished the day happy, a few others were not.

Landing on the side of disappointment were two of NASCAR’s biggest stars, Dale Earnhardt Jr and Jimmie Johnson.

Combining to lead 115 of the 194 laps at Talladega Superspeedway, both Junior and Jimmie failed to land in the top 20.  Johnson finished the race in 24th and Earnhardt Jr. was 31st, eliminating each from Chase contention.

How did the results at Talladega Superspeedway affect the latest edition of NASCAR Power Rankings at The Wife Hates Sports?

The simple answer is… not much.

Joey Logano continues to lead the way, followed by Kevin Harvick in second and Jeff Gordon in third.

Brad Keselowski – with his sixth win of the year – gained ground on the leaders, but it wasn’t enough to move him ahead of Jeff Gordon.

The Chase now moves on to Martinsville for the first race of the Eliminator Round.

Brad Keselowski discusses advancing in the Chase, and his clutch win at Talladega

Next Up: Goody’s Headache Relief Shoft 500 at Martinsville Speedway, on Sunday October 2619th at 130pm 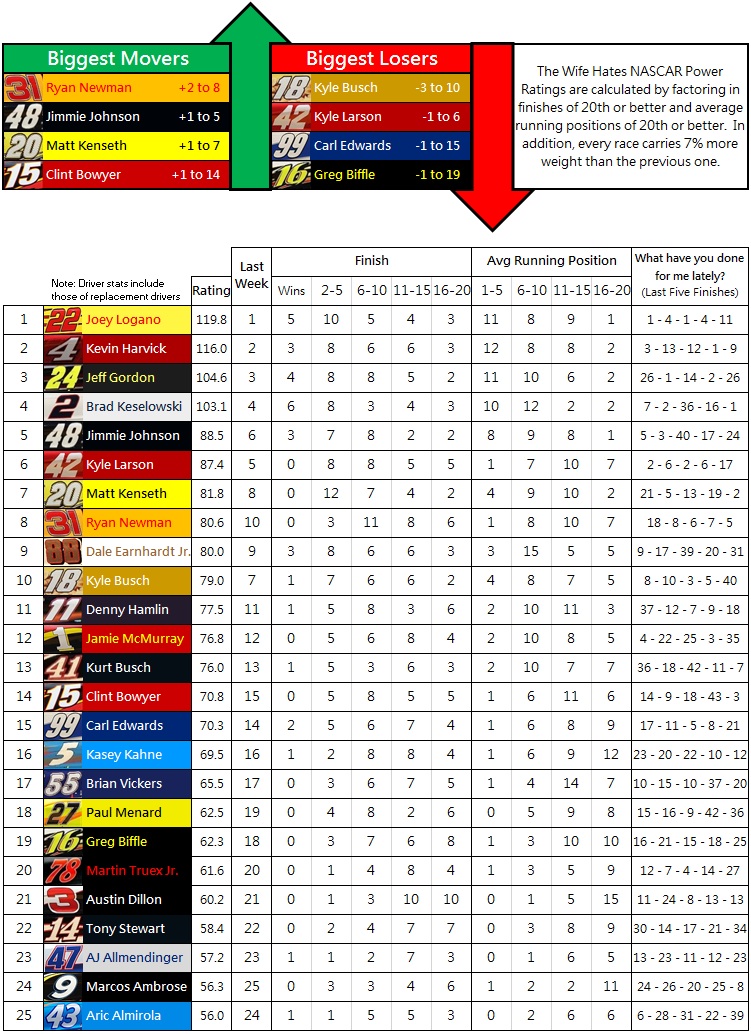