The Philadelphia 76ers are on the verge of making history.  Not the good kind, unfortunately, as six more losses in a row will give them a record-breaking 27 consecutive defeats.  For the Sixers, that’s one more than the Cleveland Cavaliers amassed between December 2010 and February 2011.

That streak helped position the Cavs to land Kyrie Irving.  Irving, of course, is a two-time All-Star in only his third NBA season. 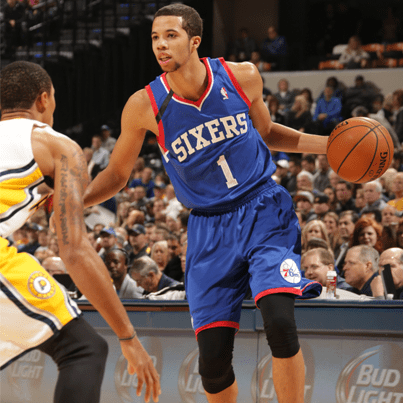 So there is a definite silver lining.  The 76ers could have two lottery picks in a draft that could include the likes of Andrew Wiggins, Jabari Parker, Julius Randle, Joel Embiid, and several other quality prospects. That’s a lot to look forward to. But there’s little outside of the play of promising rookie Michael Carter-Williams to be excited about in the present if you’re a Sixers fan.

The next opportunity to break the streak comes tomorrow night, when they host the Chicago Bulls, who lost 107-104 in their previous visit to in November.  That victory gave Philadelphia a 3-0 record to start the season, following wins over Miami and Washington.  Those wins over three of the Eastern Conference’s present top five has to seem like an eternity ago.  Suffering fans and NBA betting enthusiasts might’ve had high hopes after a hot start.

While the bottom has fallen out for the 76ers after starting so well, the Bulls have overcome a bad start to mount a challenge for the East’s #3 seed.  Many expected little from Chicago when Derrick Rose went down in late November.  Less was expected when Luol Deng was traded to the Cavs in January.  But after a 9-16 start, the Bulls have rocketed up the NBA standings and now sit fourth in the East at 37-30.  Chicago is one game behind Toronto and one and a half games ahead of the Wizards.  Thus far in 2014, the Bulls are 25-12, which is the same record that the conference-leading Indiana Pacers have posted in that time.

Optimism for the Sixers?

Despite how well the Bulls have played over the last few months, there might be reason to feel a tinge of optimism that the streak could come to an end tomorrow night. In last night’s 99-90 loss at Indiana, the 76ers actually led after the first quarter and were down only three heading into the final stretch. However, Carter-Williams missed a three that would have tied the game with 2:15 left, and the Pacers closed it out from there.

Philly’s struggles in the final few minutes of each quarter made all the difference. Indiana was a staggering +21 total from the 3:00 mark, scoring 41 total points in that stretch to the Sixers’ 20. If they can avoid that and play four quality quarters against the Bulls, tomorrow night could be the night. Of course, the odds are likely that the home team will find a way to lose a 22nd game in a row.  Then again, the streak has to end sooner or later, right?

About the Author: Eddie Griffin