Michigan freshman Spike Albrecht might just wind up being the biggest overnight sensation in the sports world this year.

During the 2013 March Madness NCAA Championship game on Monday night, superstar Trey Burke committed a second foul, paving the way for Albrecht to replace him in the first half of Michigan’s matchup with Louisville, which the Cardinals eventually won 82-76.

Albrecht answered by draining shot after shot from long range, scoring 17 points in the first half (easily a career high, see below), while quickly becoming a trending topic on Twitter and eventually quadrupling his number of followers  by the following day.

RT @ESPNStatsInfo Spike Albrecht: never scored more than 7 points in a college game prior to tonight

A little confidence will go a long, long way.

Albrecht’s confidence and hot shooting hand not only expanded during the title game, but also spread to Twitter, where his proverbial onions became ten times bigger than the Grinch’s heart did on Christmas day.

Don’t worry, Spike, the rest of us look at Kate Upton the same way.

The morning following the loss, Spike decided to write his first tweet and send it Kate Upton’s way.  Who could blame him, as most men probably would likely do the same thing, if the chance presented itself.

@KateUpton hey saw you at the game last night, thanks for coming out! Hope to see you again 😉

The overnight sensation had now officially become a 24-hour party.  Albrecht’s tweet received over 12,000 retweets and more than 7,000 favorites.

Upton didn’t directly respond, but she did appreciate her team’s overall effort.

Props to the 5’11”, 170-pound freshman, who almost looks like he should be delivering your neighbor’s newspaper instead of playing basketball.

He gave it the good ol’ college try.

With no response, the Albrecht story will have to settle for a twisted version of the standard “boy loves girl, boy loses girl” Hollywood story.

Boy settles for online bikini photos, like the rest of us… 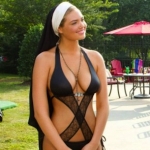