After tonight, there will be a NEW WIFE in sports.  NBA superstar and small forward Carmelo “Melo” Anthony is tying the knot with TV personality Alani “LaLa” Vazquez.

It sounds like it promises to be quite an event.  There will be plenty of well-known names attending, including newest unofficial member of the Miami Heat – and least favorite person in Cleveland – LeBron James.

The couple has been engaged since Christmas of 2004.  They have a son, Kiyan Carmelo Anthony, who was born in 2007.

It’s safe to say that a lot of us sports fans know who “Melo” is.  He’s a key member of a national champion Syracuse team.  Anthony was selected by the Denver Nuggets with the third pick in the first round of the 2003 NBA Draft.

Many ask the question, “Who’s LaLa?”

I know this because upon researching her, the majority of people can’t even spell her name correctly – including via this New York Post piece discussing their wedding.

Well, that’s the case if her official blog site is correct – which I assume that it would be.

Between “Lala” and “LaLa” or “Vasquez” and “Vazquez”, the options almost feel endless.  But who is she, you may ask?

In a nutshell, Alani “LaLa” Vazquez is a former MTV VJ.  She is a radio personality and a whole lot more.  That includes a range of producer to mother to aspiring actress.

On top of all that, she’s also quite striking, but don’t take my word for it.  Just see below in a pictorial presented by The Wife Hates Sports – in honor of the NEW WIFE in sports. 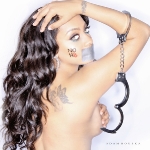 Nice catch, Carmelo – and good luck to you both.

Image Credits: Bikini Shots SI.com – as you will see via the blown up images