Entering his last season with the Senators, Fisher was named an alternate captain – and this weekend, he tied the knot with Underwood, who he’s been dating since 2008 – when he met her at one of her concerts in Ottawa.

Call it a good year.

Meanwhile, Underwood has come a long way since her American Idol audition (below) – both building on her talents and appearance.  She easily joins Kelly Clarkson as the two most successful stars to come out of the famous singing competition.

Now, Underwood is officially a wife in sports.  To welcome her to the ranks, The Wife Hates Sports presents a pictorial of Carrie Underwood in all her beauty.

As we’ll all be reminded, we can call this truly a job well done by Mike Fisher – or “deadly” as the Canadian slang term goes.

No doubt, Fisher has deked his competition both on and off the ice. 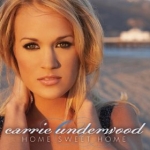