Happy Thanksgiving to you and yours from The Wife Hates Sports!  I’m THANKFUL for so much, from family to friends, and having a roof over my head.  Speaking of friends, I’m thankful for my buddy, the SportsChump.  May you have an amazing holiday, Chump… and go 0-for-5 this week.  Thanks for doing this season-long football picking adventure with me.  Speaking of our Week 12 Best Bets, we both seemed to focus more heavily on College Football’s Rivalry week.

As a reminder, Chris Humpherys (the SportsChump) – a good friend of mine through years and years of blogging – has a pick ‘em contest rolling with me for the football season.  We pick our top five games by confidence (against the spread – ATS).  Top selections can be from either the NFL or College Football slate.  We invite a special guest each week to challenge us.

Here are our Week 12 Best Bets for the week (all ATS), which includes both NFL Week 11 Best Bets and College Football Best Bets. The list is ranked in order of confidence, from $50 down to $10 (in fictional dollars, as the SportsChump prefers).

We hope you look back and have plenty of things to be THANKFUL for.  I know we do.  As for this week’s picks, here are our top picks, where I also feature what each winning team is thankful for:

The Irish are THANKFUL for Brian Kelly and having a brand name that carries more weight than most schools in the playoff chase.  Rivalry Week never quite leaves me 110% confident, as the underdogs often step up their game.  Still, Stanford has had a rough go since a shocking OT win versus Oregon on October 2nd.  The Cardinal have lost six straight.  That includes being outscored 128-32 over its last three games.  Enter Notre Dame, a team on a strong run and in the thick of the playoff picture.  The Irish have won five straight games by double digits.  Finally, Notre Dame is 5-2 ATS versus Stanford since 2013.  Give me the Irish to cover and win this one by three TD’s.

The Tar Heels are THANKFUL for Sam Howell, a likely first round pick in the 2022 NFL Draft.  North Carolina has alternated a win with a loss since September 25th.  That’s kind of crazy and an insane reason to take the Tar Heels (considering a win would be next).  The biggest matchup of this game will be the aforementioned Howell (22 TD, 8 INT) versus a Wolfpack defense that is tied for 9th in the nation, with 14 interceptions.  Overall, UNC is heavily battle tested, facing ranked teams in each of its last three games.  The Tar Heels have been competitive in each of those games and I see more of the same in this rivalry matchup.  Give me North Carolina and the points.

The Chargers are THANKFUL for Justin Herbert.  The second-year franchise QB (22 TD, 8 INT) has had a strong season and comes off a Sunday night performance where he threw for 382 passing yards against a solid Steelers defense.  Now, Herbert faces the division rival Broncos.  The last four games in this series have been decided by a TD or less.  The Broncos have won three of those four games, come off a bye week, and have the home field advantage.  The defenses are similar statistically.  On offense, Los Angeles is 8th in total yards (386.5 ypg).  Herbert and Keenan Allen are on a tear, while Austin Ekeler has been torching opposing defenses, too.  For these reasons, give me the Chargers to cover on the road.

Fans of the Buckeyes are THANKFUL for Jim Harbaugh.  For now.  “The Game” returns with an intriguing top five matchup.  This year’s game is sure to pave a path to the playoff for one team (ousting the other).  Typically, a top five matchup is not something I’d go anywhere near, especially with an eight-point line.  This Michigan team is very talented.  But, I’m sticking to the trends.  Ohio State owns this rivalry and it’s one of those things that you just keep picking a team until the opponent proves it can compete.  Dating back to 2005, the Wolverines are 1-7 at home versus the Buckeyes, with the last victory being in 2011.  The last three games in this rivalry resulted in double-digit losses for Michigan.  Make that four, thanks to C.J. Stroud and a really talented OSU offense.  Buckeyes cover.

The Oklahoma Sooners are THANKFUL for Caleb Williams.  While the freshman phenom has been inconsistent at times, the talent and drive is clearly there.  Enter the Bedlam rivalry.  The intriguing matchup here is the aforementioned Williams facing an Oklahoma State pass defense that has allowed just six TD’s through the air all season.  Williams will need to limit his mistakes and be smart with the football.  The Sooners have won four straight games in Stillwater, including the last two games by double-digits.  You guessed it, trends.  Give me Oklahoma to cover in a close game.

If you were wise, you jumped on this Buffalo line early, before it was reported that Alvin Kamara was out for the New Orleans Saints.  Either way, I’m not too sure it would have mattered.  The Saints are spiraling, their season’s outlook dismal.  Losing Kamara only solidifies that direction.  Want further proof that the Saints are in a holding pattern?  They just offered an incentive-laden, multi-million-dollar contract to a quarterback they don’t use.

Like the Saints, the Bills have also struggled lately.  Their flaws are becoming more evident.  No one in their right mind expected them to lose to the Jaguars then get blown out by the Colts two weeks later.  A closer look at their schedule shows their wins might not be as impressive as you think.  They are still, however, contenders in the AFC and have plenty of time to work out those kinks before the playoffs come.  They’ll do that Thanksgiving night in what could be a tryptophan-inspired, snooze-fest.  Everyone should be well into their turkey coma by the time the Bills blow this one open.  Bills cover the four in New Orleans and even if you have to take it at six, it’s probably still the safe play.

Like most Gator fans, I’m going to pretend this season never happened.  Welcome to the University of Florida: where living in denial is the most fashionable major.  Within the past month, the Gators fired their offensive line coach, their defensive coordinator and then, finally, their head coach.  In fact, I don’t know who will be coaching on the sidelines this weekend (it’s Greg Knox) but considering there hasn’t been much coaching there so far this season, it’s unlikely to make much of a difference.  Former head coach Dan Mullen was given the option to coach in his final game against Florida State and he declined.  Not only do the Florida Gators, 3-8 against the spread this season, go into this game with no coaches but neither of their two quarterbacks are healthy leaving this team as discombobulated as can conceivably be.

Meanwhile, the Florida State Seminoles who started the season 0-4 have won five of their last seven.  This week they travel to Gainesville but it wouldn’t really matter much where they play.  These are two programs going in opposite directions.  If Gator fans think they’ve already hit rock bottom, Florida State will have a rude awakening for them as the real rock bottom awaits.  The Seminoles go into the Swamp and steal one.  They are getting two-and-a-half.  I’ll take ‘em and impatiently count down the days until we can begin anew.  Give me Florida State plus the points.

Night games in Baton Rouge are a bear.  Trust me, I’ve been there.  It’s a spooky vibe.  This Saturday night, fourteenth-ranked Texas A&M will travel to Death Valley and find out just how spooky it is.  They will play an LSU team in front of 100,000 rabid fans ready to enter the post-Ed Orgeron era, but not before he has one last throaty hurrah.  LSU has five wins on the season.  They are one win away from bowl eligibility, a game in which Orgeron may or may not coach.  Early rumors purported that Orgeron had lost the locker room when it was announced he wouldn’t return in 2022 but the statistics do not bear that to be true.  Sure, they lost three straight games but those three were to ranked teams including Alabama, Ole Miss and Arkansas.

Texas A&M also lost to two of those three teams, their biggest win obviously coming against Alabama.  This game is relatively meaningless for A&M but I’m hard pressed to believe the players in that LSU locker room won’t want to send Coach Orgeron off with a W or at least fight their ass off getting it.  The Tigers are getting six-and-a-half at home.  I’m gonna take ‘em.

Remember last week when we talked about buying low and selling high.  I’m going to do that this week with Tennessee and New England.  If they had played this game a month ago, Tennessee would have been favored.  Throw in a five-game win streak for New England and a nearly inexplicable Tennessee loss (four turnovers) to Houston and we have a scorching hot, all-the-rave Patriots team favored by six-and-a-half.  Tennessee’s not going out like that.  We have a team that was once a shoo-in to win its division against a team nobody thought would win theirs and they’re getting six.

Sometimes it helps to look at the bigger picture.  I’m not saying what New England has done lately isn’t impressive.  They lead the NFL in point differential.  But if it weren’t for that loss to Houston, the Titans’ winning streak would be longer than the Pats’.  Tennessee gets back to the basics this weekend.  I know New England is hot right now but a touchdown is just too much.  I’ll take the Titans plus the points.

What a confusing season this has been for the Tar Heels.  They entered the year a top ten team and quickly proved they didn’t have the consistency to be a legitimate contender.  One week they win, the next week, they lose.  No seriously, UNC hasn’t won, or lost, back-to-back games since mid-September.  But they can score at will.  They’re averaging a pretty impressive 37 points per game.  They travel to Raleigh to face an NC State team that really doesn’t have all that an impressive of a win on their schedule.  They’re going to have their hands full against Sam Howell who could conceivably be playing his last game in Carolina blue.

NC State is giving six-and-a-half in what should be a back-and-forth sort of Friday night.  While the crowd should be raucous on a holiday weekend, Howell will be given the opportunity to boost his draft status in prime time.  While North Carolina State’s defense isn’t horrible, their pass defense is questionable.  I’ll take the Tar Heels to keep this thing close so give me the travel team plus the 6 ½. 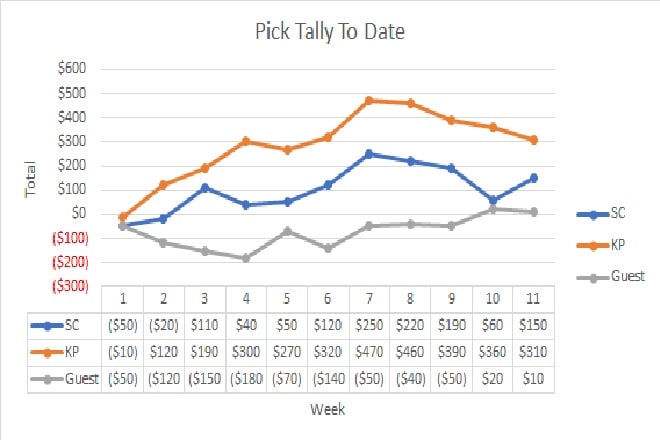 Add your Week 12 Best Bets in the comments section below.  As always, thank you for visiting and supporting The Wife Hates Sports!  Have an amazing holiday!

If you enjoy The Wife Hates Sports, you can support my work by buying from Fanatics through my site.  It’s of no additional charge to you.  I simply get a cut of any Fanatics sale purchased through links here.  That goes for any Fanatics Experience ad within posts or via the banners on the home page.