Throwing Tomatoes is back to discuss the latest cringeworthy stories in sports and entertainment.  This week’s focus is in the world of soda (Pepsi X Peeps), March Madness (Oh, hi there, Big Ten), the NBA Trade Deadline (specifically some disgusting player tweets) and more.  So, grab yourself a drinkable beverage (putting some extra emphasis on “drinkable”) and check out the latest headline insanity.

Oh and by the way, if you’re new to Throwing Tomatoes at The Wife Hates Sports, the basic idea ties with the old days when a performer on stage would get pelted with tomatoes after an abysmal performance.

Find a story in sports or entertainment that is insane or simply irks you… and throw a tomato.

It’s that simple.  You know what else is that simple?  Throwing tomatoes at these headlines in the world of sports and entertainment:

…for being a thing.

Easter strikes again!  Last time, it was the Cadbury Creme Egg Beer and this time may be worse.  Who am I kidding?  It’s a lot worse.  Pepsi is releasing a Peeps flavored version of its soda, or “Marshmallow Cola” as they also call it.  Read that again.  No, It’s not a misprint.  It’s not April Fool’s Day either.

Guys, for starters, Peeps aren’t even good by themselves.  That is, unless you are a four year-old kid hunting for eggs and craving sugar.

Second, a message to Pepsi: you traveled down this treacherous path and didn’t even have the creativity to call this beverage “Peepsi”?  Shame on you! 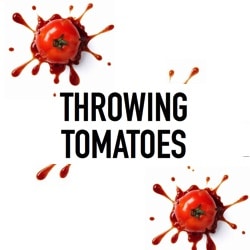 Seriously, I can’t – I just can’t.  The soda isn’t anywhere near me and I can feel the sugar layers just building up on my teeth.  I have to go find some mouthwash.

…for underachieving and pushing your bracket to spontaneous combustion.

How many times during the college basketball season did we hear that the Big Ten was at one level and the rest of the conferences were a notch or two lower?

Talented B1G squads like Penn State (who finished with a losing record and out of the tournament) trounced tourney teams such as Virginia Tech during the regular season.  That’s ONE example of MANY.

Two rounds in and Michigan is the only Big Ten team left standing.  Give the Wolverines credit, because they looked strong against LSU, despite being without one of its top scorers (Isaiah Livers).

Overall, the average seed remaining in the Sweet 16 set a record for this year’s tournament.

Will we ever see a perfect #MarchMadness bracket? 🤔 pic.twitter.com/bTatl0SYMU

Yes, it has been pure insanity and loads of fun to watch.  Maybe the COVID protocols and lopsided schedules had a hand in this year’s madness.  While that may be so, you can’t ignore the Big Ten’s choke job.  Teams have appeared outmatched, out-coached and in some cases completely embarrassed.  Athletes and speed shined in other conferences, while the Big Ten looked slow.

Can the Wolverines save the Big Ten’s reputation?  That remains to be seen.  To quote Jurassic Park, “hold on to your butts”, because it’s going to be a wild ride.

Another look at @JordanSpieth‘s wild bounce on No. 13.

He saved par and tied the hole.

It should bring a warm feeling to all the amateur hackers who spend more time missing fairways than making them.  Enjoy the game, no matter how many crooked numbers it may bring your way.

That is, until you hear that Spieth scrambled to a par and didn’t lose the hole.

Well, that feeling was short lived.

If you watch golf, that’s Jordan in a nutshell.  Often wild off the tee, but great with his short game (and scrambling).  When he puts it all together, he’s lethal.

Side Note (regarding Spieth’s tee shot): How about Patrick Cantlay on the neighboring green, not phased while putting for a birdie?  That earns a gold star (certainly not a tomato).

…for a strange introduction to his new team.

The NBA Trade Deadline saw a flurry of activity.  Despite all the deals, Evan Fournier emerged as the strangest story in the group.  Traded from Orlando to Boston at the deadline (for two second round picks), Fournier introduced himself to Boston fans on Twitter.

Hi @celtics fans,
If you’re not familiar with me, please Google my last name.
You’re welcome.
🍀

Seems pretty normal right?  Sure it is, until you actually google it – which of course, I did.

“Fournier gangrene is an acute necrotic infection of the scrotum…”

Ugh, I’ve read enough.  I think I need to go take a shower.

But before I do, this should be a lesson to kids out there.  I’m talking about kids with a name that has unfortunate secondary meaning or is susceptible to teasing.  Respond like Evan Fournier.  Let it roll like water off a duck’s back and land yourself a pro contract in the NBA, making millions.  That or whatever you want to be when you grow up.

Don’t let teasing set you back.  Rise above.  You control your own destiny.

This has been Throwing Tomatoes, where the red fruit’s destiny is not to cause any cavities.

If you love The Wife Hates Sports, you can support my work by buying from Fanatics through the site.  It’s of no additional charge to you.  I simply get a cut of any Fanatics sale purchased through links here.  That goes for any Fanatics Experience ad within posts or via the banners on the home page.