Bill Belichick and Elvis walk onto a golf course.

This sounds like a really bad joke with a soon-to-be ridiculous punchline.

Instead, it was a visual caught on camera during the CBS Sports broadcast of the World Golf Championship FedEx St. Jude Invitational last weekend in Memphis, Tennessee.

Only, we obviously know this is really not at all possible.  For one, Elvis Presley is dead and has been since August 1977 in Graceland, Memphis, TN.

Maybe “he just went home”… and likes golf.  Not just fried peanut butter and banana sandwiches.  The fictional character “K” from Men In Black will agree with at least a portion of that statement.

Then, there’s Bill Belichick, the straight to the point, mad man – mastermind head coach of the New England Patriots.  He’s not taking a break for golf (said in monotone Belichick voice).  He is too busy yelling at Tom Brady during the team’s training camp.

That’s actually not a joke.

Maybe Belichick and the Patriots are so good because the head coach can actually be at two different places at one time.  OK, that part was a joke – and a bad one at that.

In all seriousness though, the guy in the images below looks just like Coach Belichick.  I had to do a double take and originally thought it was him, only to wonder why he was hanging out with a guy that was dressed up like Elvis.  And who the heck was that guy, too?

Maybe it was Gronk.

In the end, they must both just be silly golf fans that decided to keep the polo and plaid shorts in the closet, to instead slip into some fancy look-a-like costumes for the PGA tourney in Memphis.

Side note: THE WIFE honestly did not believe me when I told her later that it was just a Belichick look-a-like.  She simply responded with “Are you sure?”

Either way, seeing this startling and amusing image at the golf tournament stirred up an old pastime here at The Wife Hates Sports.  I’m talking about the caption challenge.  Here’s hoping some of you can put on those creative hats and come up with some entertaining captions for this photo.

I’m looking at you, Tom Lancaster.

Let us celebrate the upcoming PGA playoff, the soon-to-be-starting NFL season and the career of Elvis Presley with a “Bill Belichick and Elvis” caption contest.  Add whatever gold (and platinum) captions you can possibly think of in the comments section below.  I’ll help spark those brain waves with a small sampling of the King of Rock and Roll’s greatest hits:

Images: Bill Imperson-a-Chick (On Point) and Elvis (Yeah, not so much) 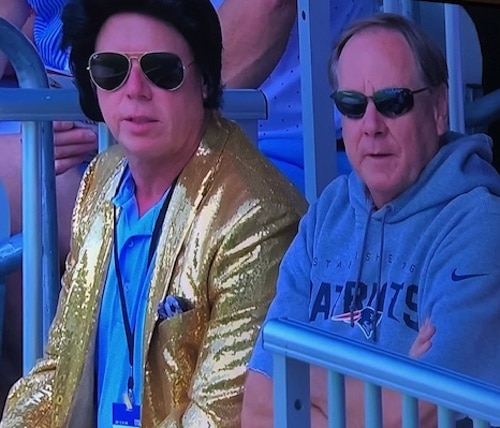 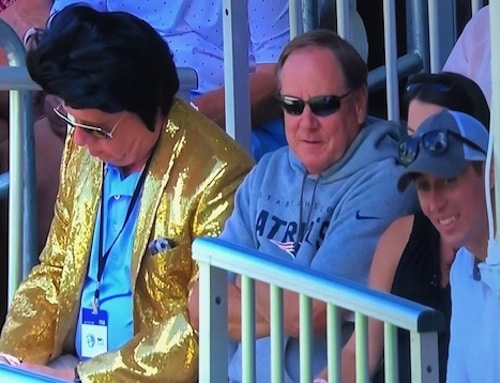 If this generates enough laughs, votes and buzz from others, I’ll bring these contests back on a regular basis and start handing out prize packages to the winners going forward.

Thanks for visiting and as always, thank you for reading The Wife Hates Sports!