There are no shortage of disappointments in Major League Baseball and KP’s All-Star Break MLB Power Rankings clearly bring a number of teams (and players) to the forefront.

At the front of the line is the defending champion Chicago Cubs, who eliminated a curse and brought a lot of the same talent into the 2017 baseball season.  The result is a sub-.500 record at the break and a 5 ½ game deficit to the upstart Milwaukee Brewers.

The Cubbies land in the bottom half of the rankings – and for a number of reasons.  However, Theo Epstein has already been aggressive weeks ahead of the trade deadline, landing Carlos Quintana in a deal with the White Sox.

The Cubs top the “Bottom 15” and at the opposite end is the hapless Philadelphia Phillies, who continue to be in full-on rebuilding mode and remain well behind the rest of the league.

With all the struggles from the teams in this group, one question comes to mind: Who has earned the right to be named each team’s Least Valuable Player for the first half?

While the answer is sometimes as clear as mud, let’s take a crack at it anyway.

The BOTTOM 15 teams of KP’s MLB Power Rankings are as follows, with LVP’s, side stats and key notes included:

Note: Stats and point totals as of the All-Star Break and do not include games from July 14th

Looking for the TOP 15 teams?  Look no further!

It’s a real shock to see the Cubs this far down the food chain, but it hasn’t been a very good few months for the defending champs.  Chicago is hitting just .239 as a team (28th in MLB), with Kris Bryant as the qualifying leader, managing a mediocre .269 average.  The pitching side isn’t much better, with Jon Lester, Jake Arrieta and John Lackey all north of the 4.00 mark.  In the end, Kyle Schwarber is the most disappointing, managing a sub-Mendoza .178 average in 68 games played.

The Atlanta offense has had some definite bright spots, although young phenom Dansby Swanson (.221/.296/.324) has yet to click with the bat.  But the most disappointing player on Atlanta’s roster is the now-cut Bartolo “Big Sexy” Colon.  Prior to being cut loose, the once ageless wonder struggled as a member of the rotation, managing a 2-8 record and 8.14 ERA in 13 starts.

One could argue that it isn’t fair that the Twins fall this far down the list, considering the surprise first half that Minnesota has had.  Miguel Sano is a star and Ervin Santana has been great.  However, the rest of the rotation has failed to product, but the most disappointing player remains former top prospect Byron Buxton (.216/.288/.306), who continues to struggle at the plate.

For the Pirates, budget and salary is always a part of the equation, which means top prospects need to perform for the team to regularly compete.  Andrew McCutchen has consistently delivered and Gerritt Cole has been steady as well, although his 4.43 ERA this season is a bit underwhelming.  But the biggest disappointment has to be Tyler Glasnow (MLB’s 23rd ranked prospect per Baseball America), who was demoted last month after posting a 2-6 record, 7.45 ERA and 1.91 WHIP over 12 starts.

While the starting rotation has failed to deliver, the most notable disappointment is the slash line of the aging Albert Pujols (.241/.288/.387), who is no longer able to impose excessive fear on opposing pitching staffs.

The White Sox unloaded Carlos Quintana to the Cubs, weakening an already suspect rotation.  Take your pick at Chicago’s pitching disappointments, whether Mike Pelfrey, James Shields, Derek Holland, or Miguel Gonzalez.  Instead, focus on Todd Frazier (.213 average), who continues to decline since leaving Cincinnati.  On the bright side, the White Sox are building quite the loaded farm system.

Toronto lost a few key players from its 2016 playoff roster, but the Jays were still expected to compete for a playoff spot.  The rotation has been painfully ineffective, especially the likes of Francisco Liriano and Marco Estrada.  Estrada (4-6, 517 ERA) has arguably been the most disappointing, with just four wins and an ERA nearly a run above his career mark.

His numbers aren’t atrocious, but we’re used to getting so much more from Miguel Cabrera, a career .319 hitter.  The star has at least 25 home runs and 100 RBI in all but one of his nine seasons with the Tigers.  This season, Cabrera is batting just .261, nearly sixty points below his career average.

Where to start with the Mets?  The once young and explosive  rotation is a shell of itself, with the majority of arms either struggling or making just a handful of starts due to injury.  That leaves it difficult to single one out.  On offense, Jose Reyes stands out as the biggest disappointment, batting just .221 in 84 games with a measly .289 on-base percentage. 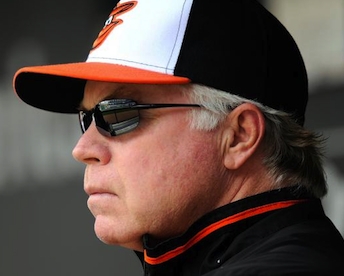 MLB Power Rankings: Buck’s Birds had the best record in baseball after 32 games

Injuries and underperforming players have really plagued the Orioles, which is especially disappointing considering the team’s blazing 22-10 start to the season.  The pitching staff has been abysmal, posting an MLB-worst 5.07 ERA.  Headlining the list of pitching disappointments is Chris Tillman, who opened the year late (due to injury) and has yet to take on the role as staff ace, posting 7.90 ERA and 2.14 WHIP over 49 innings and 11 starts.  Kevin Gausman (5.85 ERA in 19 starts) is a close second.

Tough to pick the least valuable player, especially on offense, where the A’s posted an AL-worst .236 batting average during the first half.  Stephen Vogt (now with Milwaukee) and Trevor Plouffe (in Tampa Bay) were both so bad, that they were cut.  That leaves Matt Joyce, who has posted a .220 average over 80 games and 254 at-bats.

Who do you even pick here?  Yangervis Solarte has the top qualifying average, a .268 mark – yikes.  No one in the rotation with more than ten starts has a sub-4.00 ERA – again, yikes.  Perhaps the least valuable should be the ever-fading Jered Weaver, who is on the DL with a hip injury and managed a 7.44 ERA, with zero victories over nine starts before landing there.

There were high expectations for the Giants, especially with a rotation featuring Madison Bumgarner, Johnny Cueto, Jeff Samardzija, Matt Cain and Matt Moore.  Bumgarner has made just four starts due to a shoulder injury (dirt bike accident).  That should give him least valuable votes, as it has clearly derailed the team.  But the bloated contracts of Cueto (4.51 ERA) and Samardzija (4.58 ERA) almost land each in a tie for co-LVP.

Expectations were minimal considering the Phillies are in full-on rebuilding mode, but the team’s first half was extremely disappointing, nevertheless.  At the forefront is the performance of Jerad Eickhoff, who had such  a promising 2016 season.  This year has been a different story, as Eickhoff is just 1-7, with a 4.63 ERA and 1.51 WHIP over 15 starts.

* All stats per MLB.com

The Wife Hates Sports MLB Power Rankings system has a method to its madness, attempting to be different and not just rank by popularity and record.  It mixes a secret formula of six completely different categories, meshed into a points system.  The categories don’t just include team results regarding record, but how each team has performed recently, as well as incorporating some statistics on both a team’s offense and pitching staff, too.