Jimmie Johnson is the 2016 Sprint Cup Series champion, but where did he land in the final NASCAR Power Rankings?

The answer may surprise you.  That’s simply because things are done (and calculated) differently here at The Wife Hates Sports.

It has been over a week since Johnson made NASCAR history, clinching his SEVENTH premier series title and joining Dale Earnhardt and Richard Petty in the history books.  The powers that be in the NASCAR world are likely still reveling in this incredible storyline – and you don’t need to look any further than its official Instagram feed to know that to be true.

So, as the racing world simmers down into the 2016 offseason, it’ll soon be time to reflect and predict what is to come next year.

But before doing so, let’s look back on a season that featured a number of incredible performances from a number of drivers, from the aforementioned Johnson, to others including Kevin Harvick, Joey Logano, Brad Keselowski, Kyle Busch and more.

The season also witnessed a concerning injury to a concussed Dale Earnhardt Jr., a brief return from Jeff Gordon and the end of a career for Tony Stewart.

All in all, it was a big – no, make that unforgettable – season from NASCAR, and one that was chock-full of storylines.

Meanwhile, in the Final Rankings…

Where did everyone land following the final race of the season at Homestead?

Many premier websites have Jimmie Johnson finished on top of their respective NASCAR Power Rankings and understandably so, when following an arbitrary ranking system.

TWHS prides itself on a unique system built by Bill Schneider, one that calculates against a number of factors.

In the final edition of the 2016 NASCAR Power Rankings at TWHS, Johnson finishes in 10th place, despite a season-high five victories and two wins over the season’s final four weeks.

The 2016 NASCAR Power Rankings champion is Joey Logano, who finishes six ratings points ahead of Kyle Busch, who grabs the runner-up position.  Denny Hamlin finishes the season in third place, followed by Kevin Harvick in fourth and Brad Keselowski in fifth place.

With a one-spot jump and third place finish at Homestead, Kevin Harvick is the biggest mover of the week.  Matt Kenseth and Carl Edwards also had strong weeks and moved up a spot in the final ranking of the season.

On the flip side, Brad Keselowski and Martin Truex Jr. are the biggest losers of the week, each falling one slot, but losing the most ground in the overall ratings system.

Congrats to Jimmie Johnson on his record-breaking year and hope to see all of you next season. 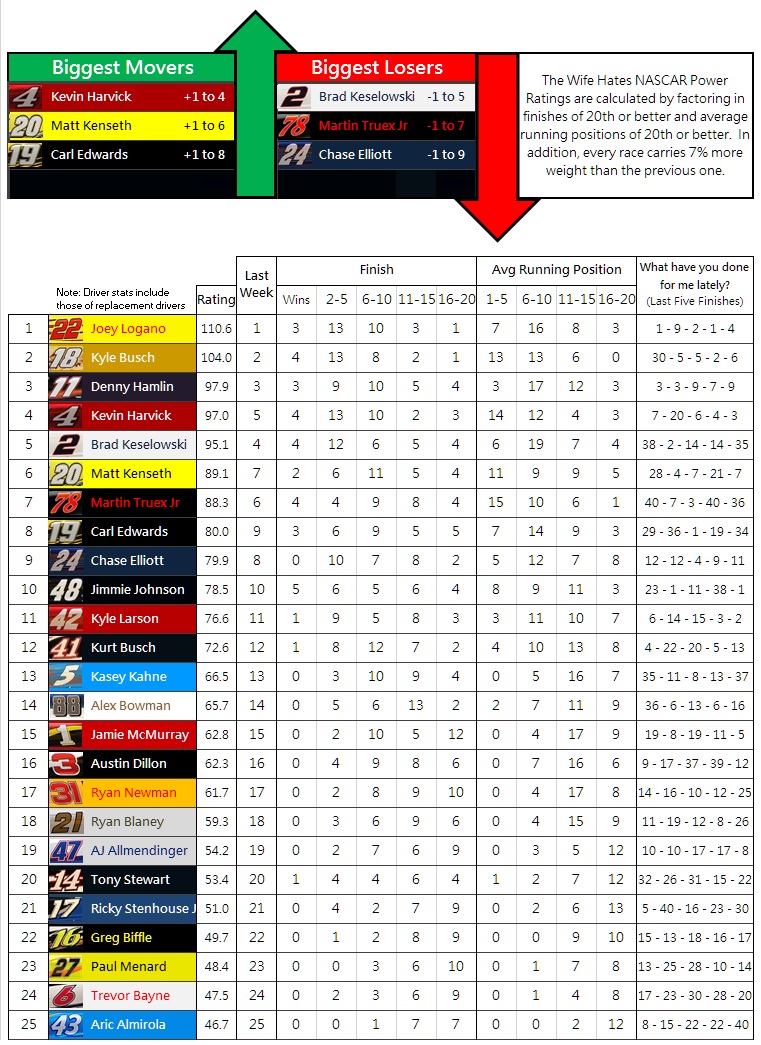