Carl Edwards is the next in line to join the Championship 4, winning a rain-shortened race at Texas and notching his third victory of the 2016 Sprint Cup season.  As you will soon see, the win did little for his current standing in the NASCAR Power Rankings.

More importantly, the back-flipping Edwards joins Jimmie Johnson in the title chase, with two more spots yet to be determined.

Of the six drivers looking to duke it out for the final two Championship 4 slots, Joey Logano and Kyle Busch appear to have a leg up heading into next weekend’s race in Phoenix.

Logano was the runner-up in Texas, while Kyle Busch finished in 5th.  Kevin Harvick posted a 6th place finish and Matt Kenseth was 7th.  Kurt Busch (20th place) finished well behind the rest of the remaining Chase drivers.

Following the AAA Texas 500, it’s Joey Logano that returns to first place in the latest edition of NASCAR Power Rankings at The Wife Hates Sports.  Logano opens a near three-point edge over Kyle Busch,who drops from first to second this week.

Meanwhile, the flux in the top five continues, as Martin Truex Jr. shifts back to third place (from fifth), while Denny Hamlin falls a spot to fourth and Brad Keselowski fades back to fifth (from second).

With his three-spot jump to first place, the aforementioned Joey Logano is also the biggest mover of the week.  Martin Truex Jr. also had a strong week, moving up two spots in the latest rankings.

On the flip side, Brad Keselowski is the biggest loser of the week, falling three spots to fifth place.  No other driver in the field fell more than one spot in this week’s rankings.

With just two races remaining, the Chase for the Sprint Cup next heads to Phoenix for the final race in the Round of 8.

NASCAR Power Rankings: With the win at Texas, Carl Edwards earns a berth in the Championship 4

Next Up: CAN-AM 500 at Phoenix International Raceway on Sunday November 13th at 2:30pm ET 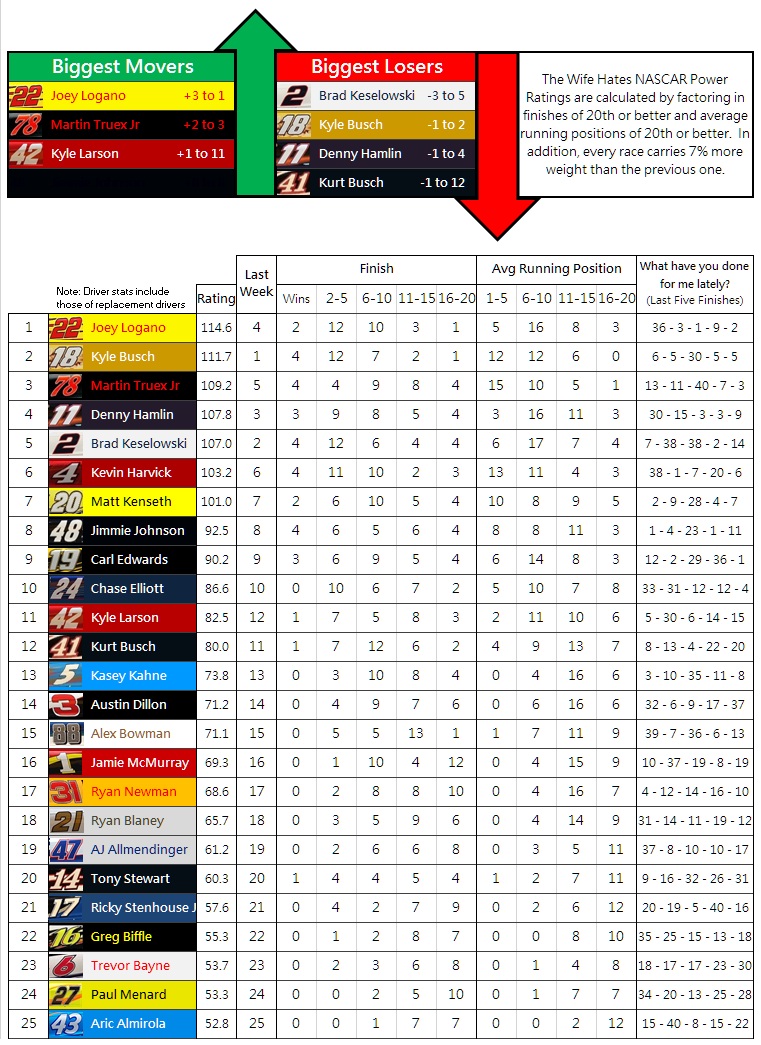