With the regular season winding down, it’s the right time to talk College Football All-American team lists and awards, before we get too entrenched in Thanksgiving tryptophan comas and College Football Playoff rankings.

As a long time member of the Football Writers Association of America (FWAA), I am fortunate and honored to get to vote for a number of College Football awards.  Included in that is the FWAA All-American team, which has been a staple dating back to 1944.

Here are my selections for the offensive skill positions and offensive line, with some honorable mentions peppered into the mix:

This may be the biggest no-brainer of the season, despite Louisville’s recent struggles and disappearance from the College Football Playoff picture.  Despite all of that, Jackson’s numbers have been gaudy and video game-worthy for the entire season:

Pumphrey is second in the nation in rushing (1,855 yards), averaging 168.64 yards per game.  He has just two sub-100 rushing performances this season and four games of more than 200 yards on the ground.  His fourteen rushing touchdowns are tied for 12th in the country. 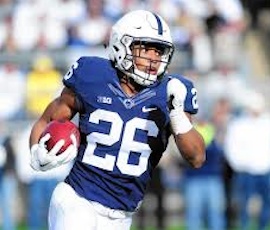 The numbers (1,205 yards rushing, 316 yards receiving, 16 total TD) are not nearly as gaudy as some of the nation’s other top backs, but one must consider the impact that Barkley has had on this Penn State team.  It’s Barkley’s impact, class and flash that have set him apart this season, and in one of the big surprises of the year, Penn State has an outside shot at the College Football Playoff.

One of the key stars on P.J. Fleck’s Broncos, Davis is not only seventh in receiving yards (1,202) and tied for first in receiving touchdowns (16), but he’s also closing in on the FBS receiving record.

The Sooners are making a late College Football Playoff surge, sparked by the play of Westbrook, who is second in the nation in receiving yards (1,354) and tied for second in receiving touchdowns (15).

Like Louisville’s Lamar Jackson, Evan Engram is likely to get a lot of no-brainer votes amongst voters.  Playing in the always competitive SEC conference, Engram leads all of the nation’s tight ends in receiving yards (926) and is second in receptions (65).

C – Pat Elflein, Ohio State – Anchoring one of the country’s most talented teams

OL4 – Ryan Ramczyk, Wisconsin – The Badgers are always big in the trenches

*Stats pulled from cfbstats.com and updated as of November 23, 2016

Who else lands on KP’s College Football All-American team?