Kevin Harvick is called “The Closer” for a reason.

Left for dead in the Round of 12, Kevin Harvick rebounded to take the checkered flag at Kansas, cementing his spot in the Round of 8.  The win was Harvick’s fourth of the NASCAR Sprint Cup season and a much needed performance following back-to-back sub-par finishes at Charlotte and Dover.

As a result, the number four becomes the clear theme of this week’s edition of NASCAR Power Rankings at The Wife Hates Sports.

First and foremost, Kevin Harvick and the No. 4 Chevrolet SS for Stewart-Haas Racing took the checkered flag at Kansas Speedway over the weekend.  That means there are now FOUR drivers with FOUR wins this season: Kevin Harvick, Brad Keselowski, Martin Truex Jr. and Kyle Busch.

Not surprisingly, this quartet of drivers also own the top FOUR spots in the latest power rankings at TWHS.

Kyle Busch leads the way, following a 5th place finish at Kansas and fifth straight top ten.  Brad Keselowski (38th at Kansas) drops back to second place, followed by Martin Truex Jr. in third and Kevin Harvick in… you guessed it, FOURTH place.

Kevin Harvick – with his two spot jump – is also the biggest mover of the week.  Joey Logano and the No. 88 car also moved up two spots.

Following a second straight finish outside of the top ten, Denny Hamlin is the biggest loser of the week, falling two spots to sixth place.  Matt Kenseth and Jamie McMurray also had rough weeks.

The Chase for the Sprint Cup heads to Talladega for the final race in the Round of 12.

Next Up: Hellmann’s 500 at Talladega Superspeedway on October 23rd at 2:00pm ET 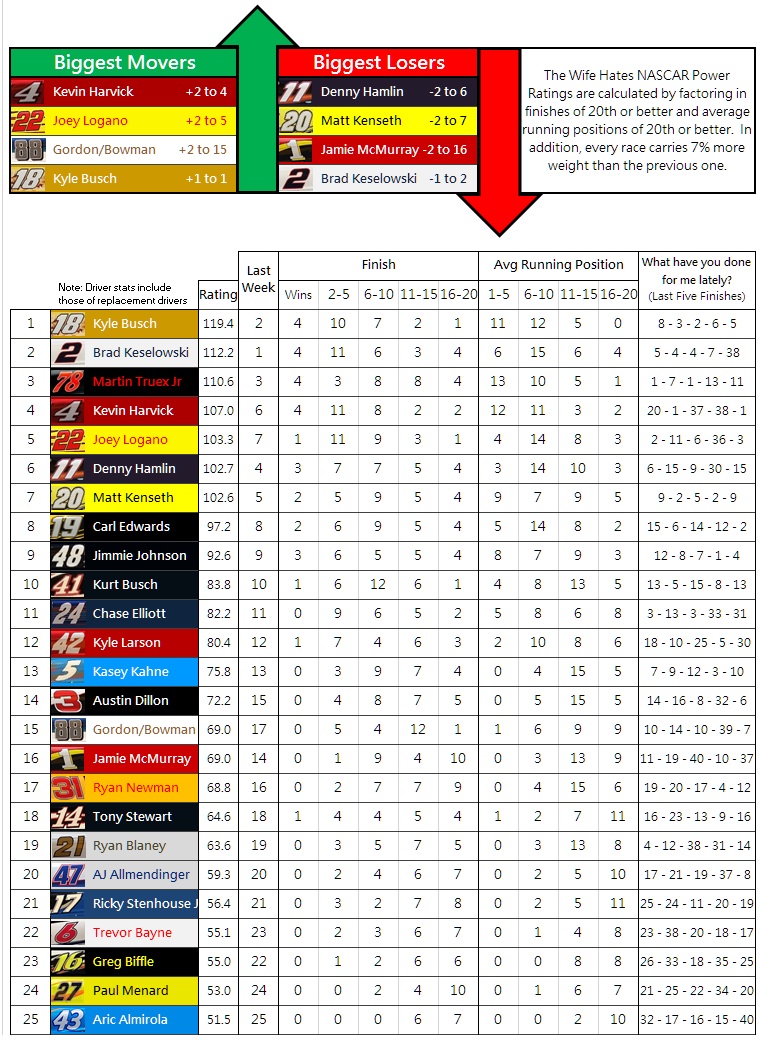