Kevin Harvick’s latest lead in the NASCAR Power Rankings turned out to be short lived.

Following a 37th place finish at Dover, Harvick fell out of first place, a position that he has held onto for the majority of the NASCAR Sprint Cup season.

Taking Harvick’s place is Brad Keselowski, who cracked the top five for the fourth consecutive race.

Meanwhile, Martin Truex Jr. continued his torrid pace, landing in Victory Lane for the third time in five races.  The win was Truex’s fourth of the season and enough to move him up to third place in the latest rankings.

Sandwiched in between Keselowski and Truex Jr. is Kyle Busch, who was the runner-up to Truex at Dover.

Behind the quartet of Keselowski, Busch, Truex Jr. and Harvick stands Denny Hamlin in fifth place, just a fraction of a point behind Harvick.

Joey Logano remains very much in the hunt and lands in sixth place this week, just a few ratings points behind Hamlin and Harvick.

In the “what have you done for me lately” category, the red hot Martin Truex Jr. is the biggest mover of the week, jumping two spots and into 3rd place.  Chase Elliott also moved up two spots cracks this week’s top ten.

On the flip side, Kevin Harvick is the biggest loser of the week, falling three spots to fourth place.  Kyle Larson and Jamie McMurray each also dropped back three places in the latest poll.

The Chase for the Sprint Cup opens the Round of 12 on Saturday night in Charlotte.

Next Up: Bank of America 500 at Charlotte Motor Speedway on October 8th at 7:00pm ET 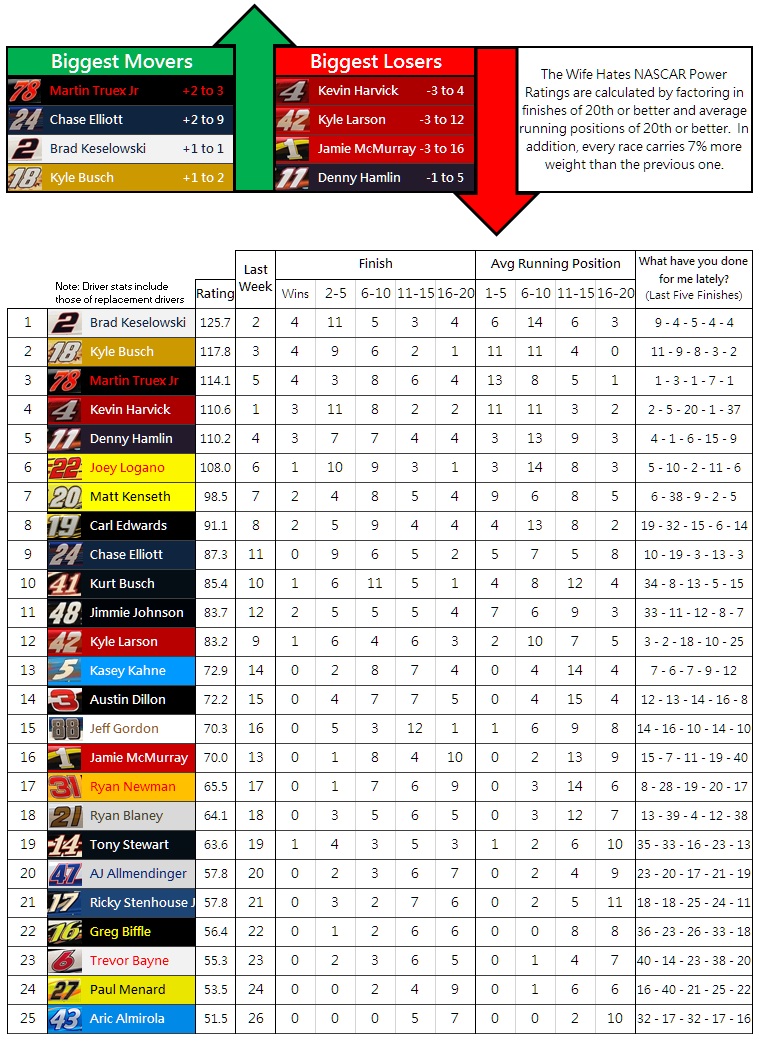