Skip to content
Home|Sports|NASCAR Power Rankings: Joey Logano Moves Up, Round of 8 Set

NASCAR Power Rankings: Joey Logano Moves Up, Round of 8 Set

Joey Logano took the checkered flag at Talladega, earning an automatic bid into the Round of 8.  With the win – his second of the NASCAR Sprint Cup season – Joey Logano moves up in the latest NASCAR Power Rankings at The Wife Hates Sports.

Kyle Busch hangs onto first place by the slimmest of margins, owning a half-point edge over Joey Logano in second.  Kevin Harvick (7th at Talladega) moves up one spot to third place, followed by Brad Keselowski (38th) in fourth and Denny Hamlin (3rd) in fifth place.

Martin Truex Jr. falls out of the top five, but remains within reach of the leaders.

Joey Logano is hands down the biggest mover of the week, rising three spots from 5th to second place.

Following a 40th place finish at Talladega, Martin Truex Jr. is the biggest loser of the week, falling three spots and out of the top five.  Brad Keselowski also had a tough week, dropping two spots.

The Round of 8 is now set, with Joey Logano, Jimmie Johnson, Kevin Harvick, Matt Kenseth, Carl Edwards, Denny Hamlin, Kurt Busch and Kyle Busch all still in the mix.

The Chase for the Sprint Cup heads to Martinsville for the first race in the Round of 8.

Next Up: Goody’s Fast Relief 500 at Martinsville Speedway on Sunday October 30th at 1:00pm ET 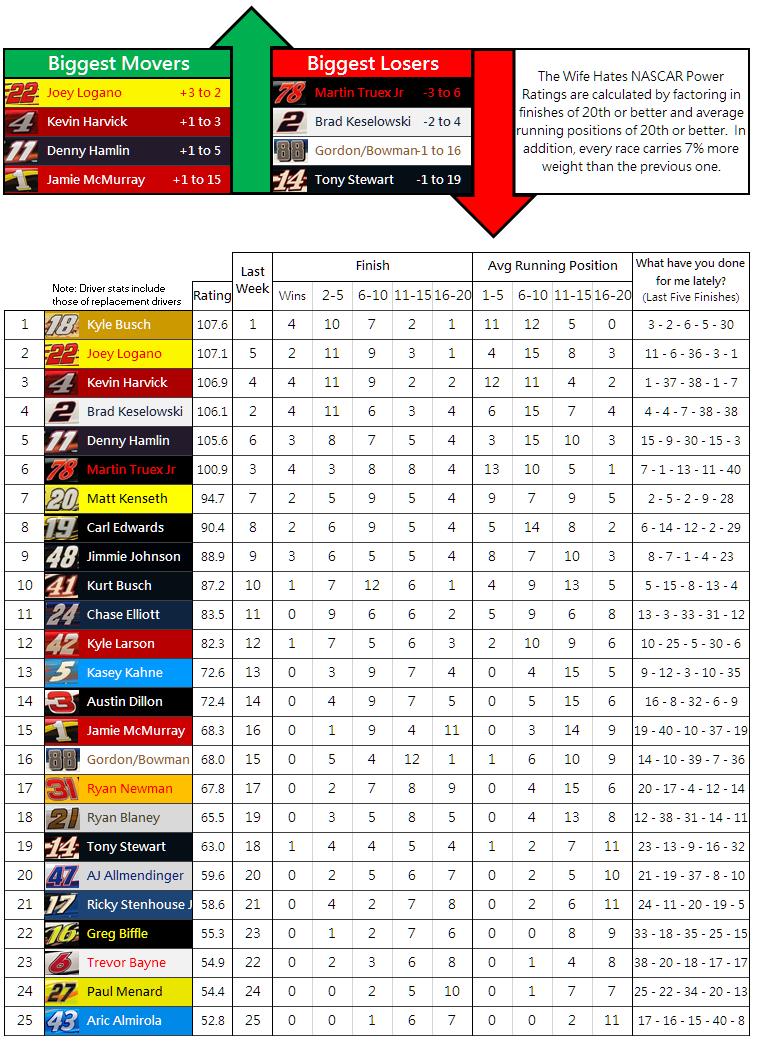