There were NASCAR headlines aplenty at Sonoma over the weekend, with Tony Stewart jumping to the forefront.

The 45-year-old Stewart raced to Victory Lane for the first time since his winat Dover in 2013, ending a three-year drought filled with emotion, heartache and pain (both physical and mental).

Despite being one of the biggest stories of the Sprint Cup season, the victory did very little for Stewart in the latest edition of NASCAR Power Rankings at The Wife Hates Sports, moving him up two spots to 18th place.

Elsewhere, Kyle Busch had a bit of a recovery of his own, cracking the top ten at Sonoma and ending an abysmal month of poor performances.  Busch also rises two spots in the latest rankings (to 7th place).

Kevin Harvick, who had another strong run over the weekend, finished sixth at Sonoma and builds his ratings lead to nearly twenty points.

Kurt Busch remains in second, followed by Carl Edwards, who is also the biggest mover of the week, jumping three spots to third place.

Joey Logano moves up one spot to fourth and Martin Truex Jr. returns to the top five, sliding up two slots (from seventh to fifth).

Chase Elliott and Brad Keselowski are the biggest losers of the week, each dropping out of the top five.  Elliott (21st at Sonoma) falls four spots to 8th and Keselowski (15th over the weekend) drops three slots to sixth.

Next week, the NASCAR field heads to Daytona for the Coke Zero 400.

Next Up: Coke Zero 400 Powered by Coca-Cola at Daytona International Speedway on Saturday July 2nd at 7:45pm ET 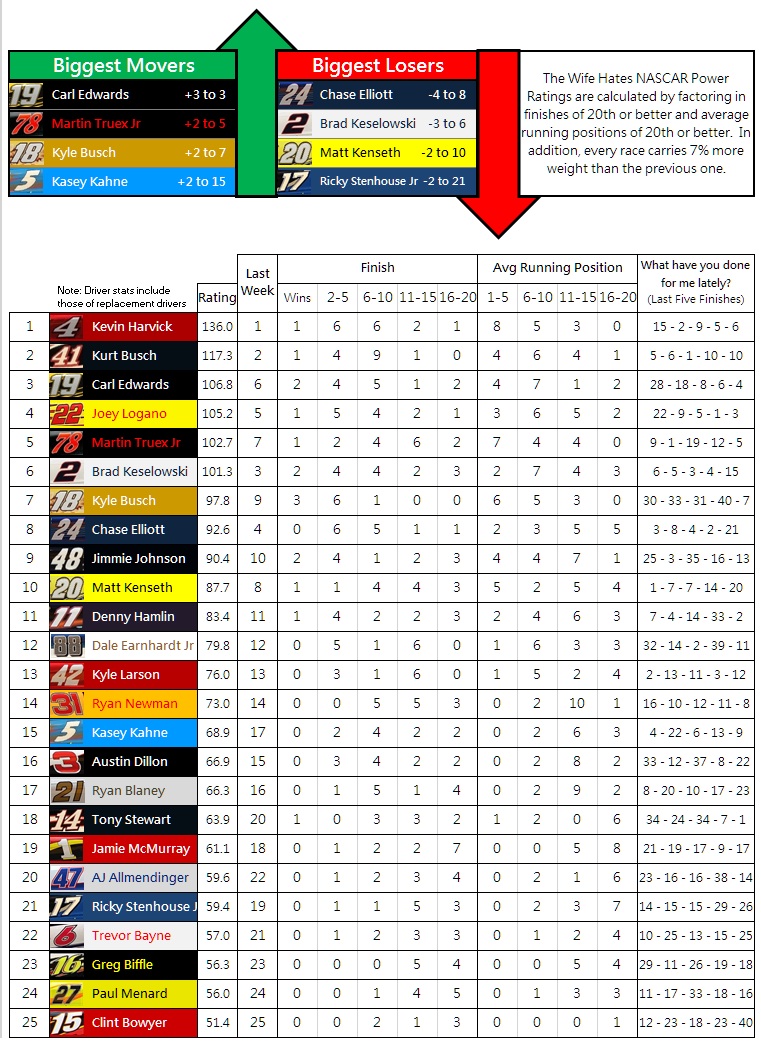