The weekend at Michigan featured big-time performances from Joey Logano and Chase Elliott.

Logano took the checkered flag at the FireKeepers Casino 400, leading 138 of 200 laps and notching his first victory of the 2016 NASCAR Sprint Cup season.  It was Logano’s third straight race with at least a top ten finish.

Chase Elliott also had a big week, finishing as the runner-up at Michigan and cracking the top ten for the fifth straight race.

Following their big weekends, both Logano and Elliott made big moves in the latest NASCAR Power Rankings at The Wife Hates Sports.

Kevin Harvick (5th at Michigan) continues to lead the way, with a 17-point edge over Kurt Busch, who has a firm grasp on second place.  Brad Keselowski moves up one spot to third, followed by Chase Elliott in fourth and Joey Logano in fifth.

Not surprisingly, Joey Logano and Chase Elliott are also the biggest movers of the week, each jumping five spots in the latest poll.  Tony Stewart also had a solid week, moving up three spots.

Elsewhere, the free-fall continues for Kyle Busch, who finished in 40th place at Michigan, due to an engine failure.  It was Busch’s fourth straight race finishing 30th or worse and as a result, he’s the biggest loser of the week, falling six spots to 9th place.

Matt Kenseth and Ryan Blaney also had tough showings, leading to a three-spot drop in the latest NASCAR rankings.

In two weeks, the NASCAR field heads to Sonoma for the Toyota Save Mart 350. 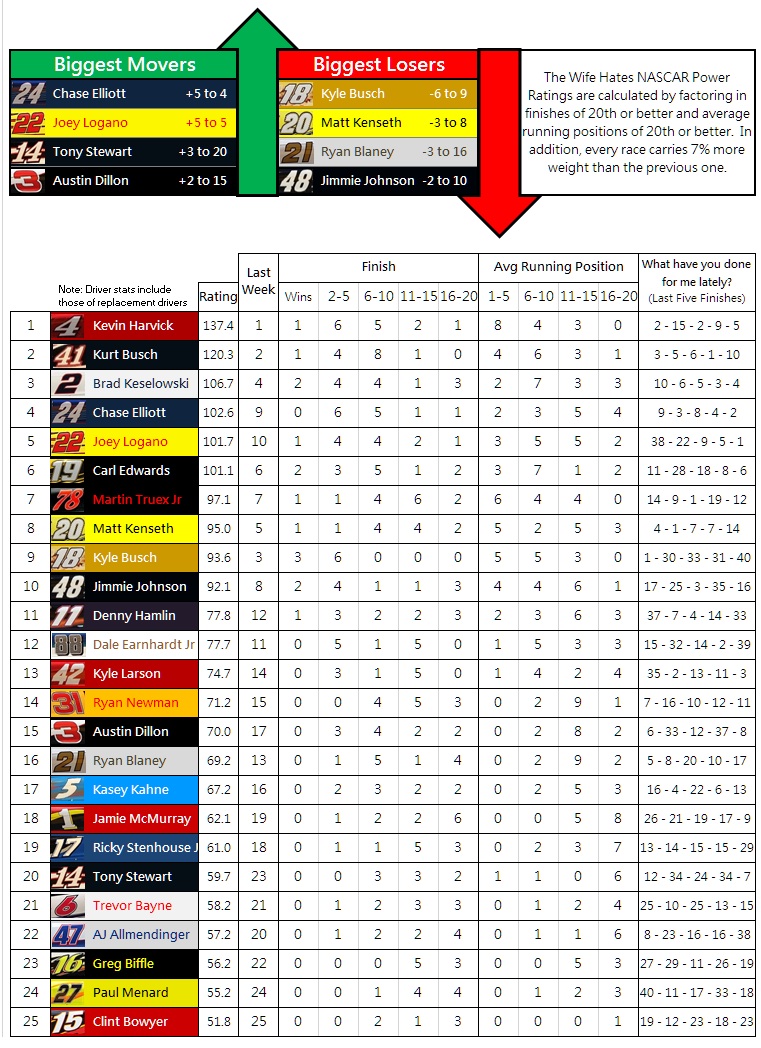