Skip to content
Home|Sports|NASCAR Power Rankings: Harvick and Edwards on the Rise

NASCAR Power Rankings: Harvick and Edwards on the Rise

Carl Edwards dominated at Bristol over the weekend, taking the checkered flag from the pole position and leading 276 of 500 laps at the Food City 500.  The win was his first of the 2016 Sprint Cup season.

Dale Earnhardt Jr. was the runner-up over the weekend, although he failed to provide much of a challenge to the backflipping member of Joe Gibbs Racing.

Kurt Busch finished third at Bristol, followed by Chase Elliott in fourth and Trevor Bayne in fifth place.  Kevin Harvick had a solid showing, leading 13 laps and finishing with a top ten (7th to be exact).

As a result, Kyle Busch drops from first to third place in the latest edition of NASCAR Power Rankings at The Wife Hates Sports.  Kevin Harvick takes over the top spot, opening up a 25-point lead on the field.  Bristol winner Carl Edwards jumps three spots and into second place this week.

Rounding out the top five is Jimmie Johnson in fourth and Joey Logano in fifth.

Chase Elliott is the biggest mover of the week, jumping four spots in the latest rankings, while Bristol winner Carl Edwards also cracks the list, moving up three spots.

On the flip side, Austin Dillon and Kyle Larson are the biggest losers of the week, each dropping four spots.

Next week, the Sprint Cup season heads to Richmond for the Toyota Owners 400.

Next Up: Toyota Owners 400 at Richmond International Speedway April 24th at 1:00pm ET 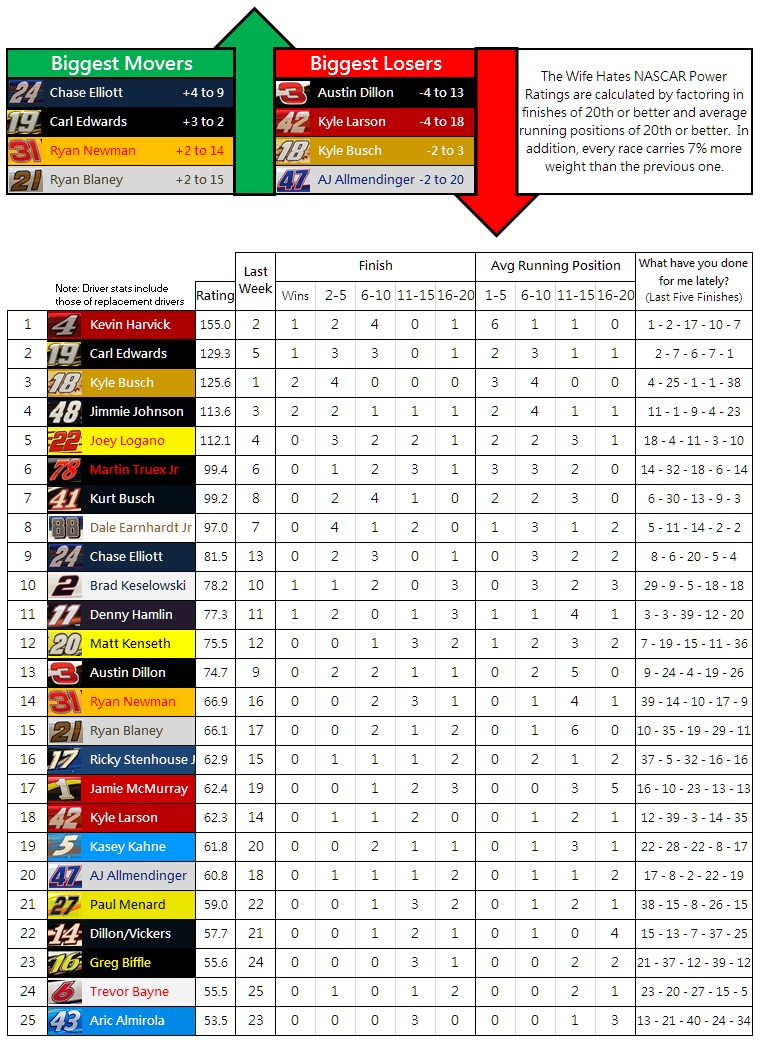