The weekend at Pocono was an interesting one, with Kevin Harvick’s season-long momentum finally running on fumes.

Meanwhile, Matt Kenseth was practically the only driver not to run out of gas.

The Harvick and Kenseth headlines alone led to some significant changes in the latest NASCAR Power Rankings at The Wife Hates Sports.

Harvick, who suffered a blown engine, posted his first DNF of the season.  As a result, Harvick’s monster rankings lead over Joey Logano was cut in half.

Kenseth, meanwhile, posted his second victory of the season and is the week’s biggest mover, jumping four spots and cracking the top five.

The jump by Kenseth led to some additional shuffling in the rankings, with the most surprising shift being Dale Earnhardt Jr.’s fall, despite finishing fourth at Pocono.

In fact, the fourth through eighth place positions are separated by less than one ratings point, which is the primary reason for Junior’s drop.

Harvick holds a 28-ratings point lead over Joey Logano, who lands in second place for the second consecutive week.  Martin Truex Jr. moves up to third place this week, followed by Pocono winner Matt Kenseth.  Jimmie Johnson holds a slight edge over Brad Keselowski and is in fifth place.  The aforementioned Keselowski sits in sixth, just ahead of Kurt Busch and Dale Earnhardt Jr.

Kurt Busch (down four spots to 7th) and Dale Jr. (down three spots to 8th) are the week’s biggest losers.

Next week, the Sprint Cup season heads to Watkins Glen, where we’ll attempt to shy away from the cheesy humor, despite the upcoming Cheez-It 355.

Next Up: Cheez-It 355 at Watkins Glen International on Sunday August 9th at 2:00pm ET 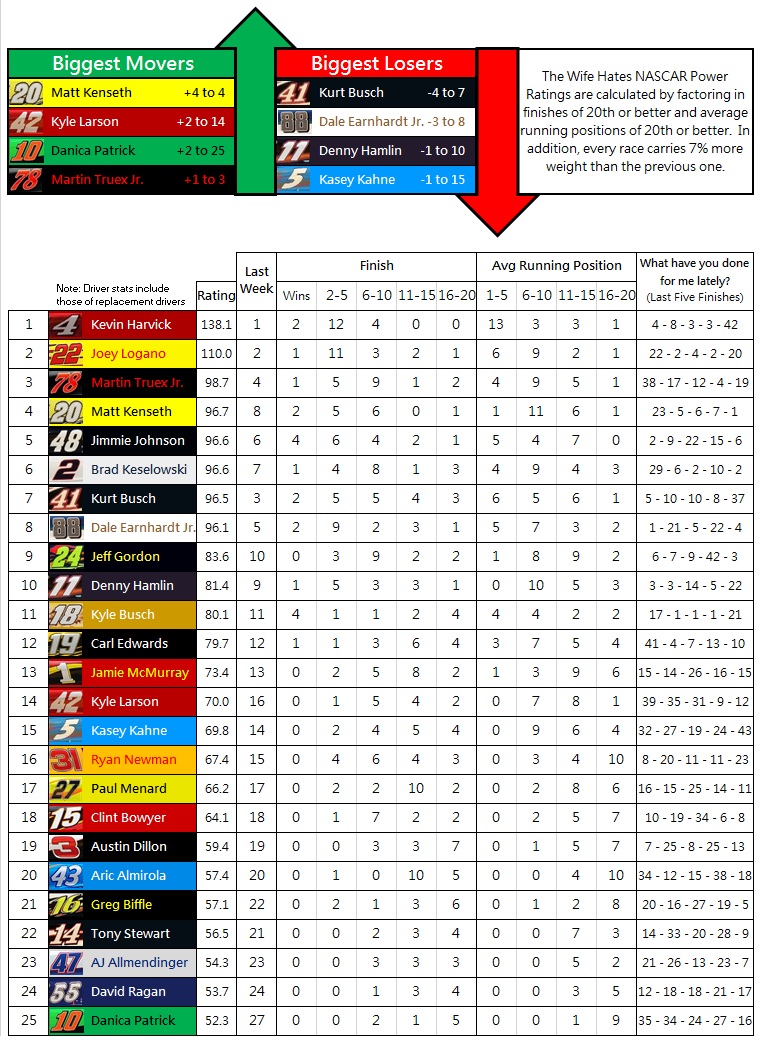