“Rain Rain Go Away” certainly won’t be a phrase that you will be hearing from Kurt Busch after this weekend’s rain-soaked race at Michigan.

But you may hear it from Kevin Harvick.

Busch stole away a victory – his second of the 2015 NASCAR Sprint Cup season – at what should be referred to as the “Quicker than Quicken Loans 400“.

The race, shortened to 138 laps due to intermittent rain showers and numerous delays – went to Busch, who led just six laps on the day.  Dale Earnhardt Jr. finished as the runner-up, followed by Martin Truex Jr., Matt Kenseth and Joey Logano.

Kevin Harvick, the NASCAR leader for the majority of the 2015 Sprint Cup season, had a tough day, finishing 29th at Michigan.

The rain-drenched weekend caused a minor shakeup in the latest edition of NASCAR Power Rankings at The Wife Hates Sports.

Harvick continues to lead the rankings, but his sub-par Michigan performance saw his lead cut in half.  Martin Truex Jr. remains in second place, trailing Harvick by a hair under 30 ratings points.  Joey Logano returns to third place this week, followed by Michigan winner Kurt Busch and Dale Earnhardt Jr.

Jimmie Johnson falls out of the top five and is this week’s biggest loser, dropping three spots in the latest poll.  Jeff Gordon and Ryan Newman also had tough weeks, each falling two spots.

After a week off, NASCAR heads to Sonoma. 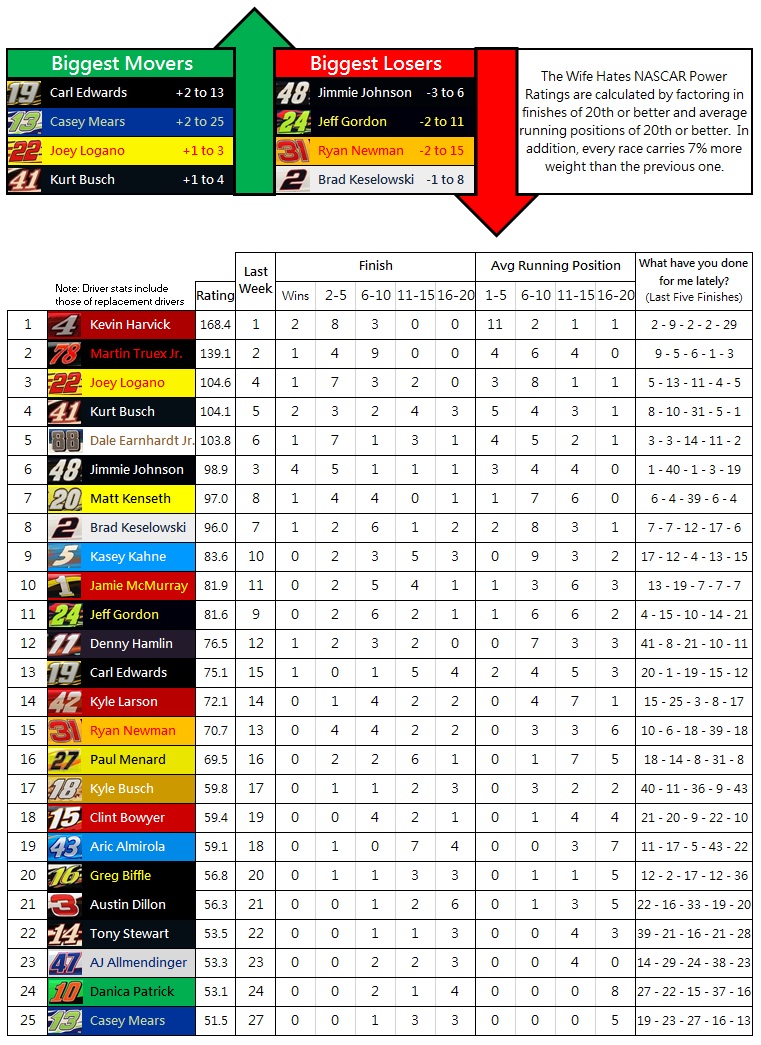