Last weekend’s Chase race at Charlotte had its share of headlines, and you can take that to the bank.

The Bank of America 500 had a whole lot of everything, from hot heads to red hot drivers, and more.

Kevin Harvick emerged from the pack, leading 162 laps on the day and landing in Victory Lane.  The win was Harvick’s third on the season, and one that advances him to the next round of the Chase for the Sprint Cup Championship.

But the race’s happy moments were likely limited to Victory Lane, and nowhere else.  Tempers flared following the race, leading to a few confrontations amongst drivers.  Brad Keselowski was at the forefront, getting into heated exchanges with both Denny Hamlin and Matt Kenseth.  The post-race altercations also included a number of crew members from each team.

Keselowski was later fined by NASCAR, as was Tony Stewart, who had some involvement in the incident, as well.  Both Hamlin and Kenseth came away unscathed.

In the latest NASCAR Power Rankings at The Wife Hates Sports, the top four spots remain unchanged.  Logano, with his solid run, holds onto first place in the latest ratings poll.  With the win, Kevin Harvick gains significant ground on Logano, but remains in second.  Jeff Gordon, following his runner-up finish at Charlotte, remains in third, and also gains ground on the leader.  Keselowski, despite a $50,000 fine and a rough 16th-place finish, still sits in fourth.

The Chase moves on to Talladega, for its third and final race of the Contender Round.

Next up: Geico 500 at the Talladega Superspeeddway, on Sunday October 19th at 2pm Eastern 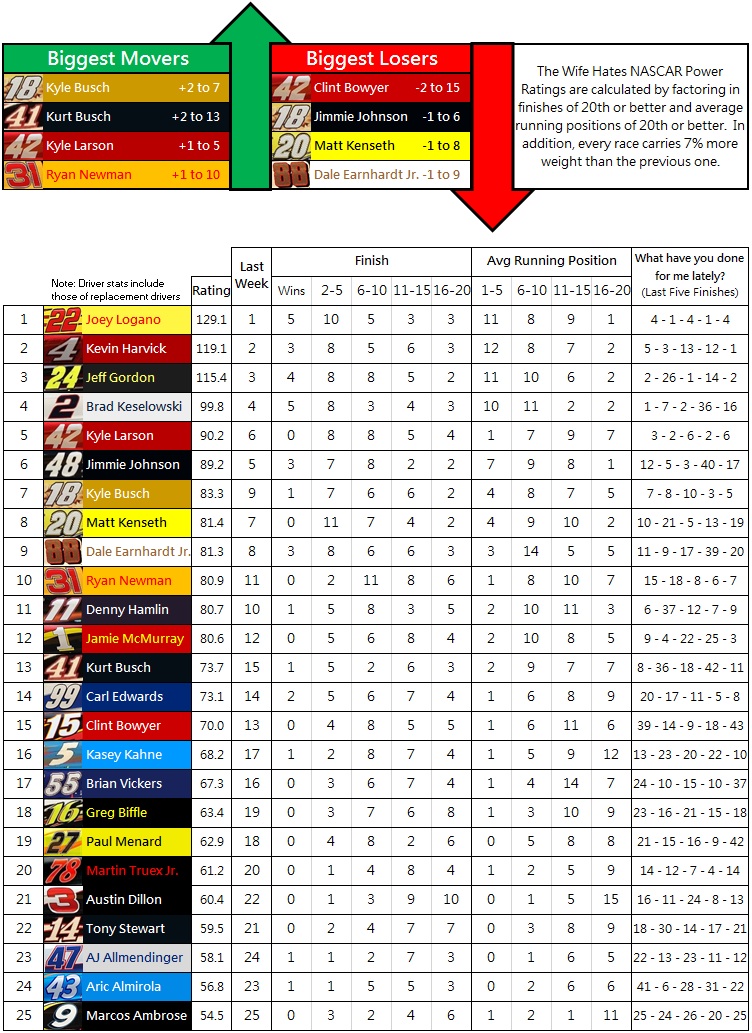