Skip to content
Home|Sports|Football is Coming, So Get Up and Make Some Noise Already!

Football is Coming, So Get Up and Make Some Noise Already!

Put on that game face.  Football is coming.

I CAN’T HEAR YOU.

Aren’t you in pain from a summer of So You Think You Can Dance and America’s Got Talent?  Sure you are, but quit crying over that open wound left from excessive Gosselin gossip.

RUB SOME DIRT ON IT.

College football is just a hair over two weeks away – a stone’s throw from a heck of an opener between #14 Oregon and #16 Boise State – on the “Smurf Turf”.  If the coma-inducing jerseys and field aren’t enough, just look at the talent and implications of game one, as the Ducks could easily challenge USC for the Pac-10, while the Broncos could be this year’s BCS darling.  Heck, one dream alone can be crushed before the opening weekend.

Can I get a “Statue of Liberty” play?  Don’t roll your eyes, Bob Stoops.

If the Thursday opener on September 3rd isn’t enough, then look no further than two days later, when #5 Alabama faces #7 Virginia Tech, #3 Oklahoma takes on BYU, and #13 Georgia clashes with #11 Oklahoma State.

OK, so to rehash, that’s an intense Nick Saban leading ‘Bama against the Hokies and Frank Beamer, two Heisman candidates facing off in Max Hall (BYU) and Sam Bradford (Oklahoma), and a Stafford-free Georgia squad going against the Cowboys and Mike Gundy… the man, who’s now 41.

Are you fired up now, football fan? 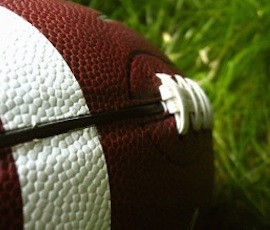 If not, then look at the implications of these big games – not just to each school playing in these games, but other conferences.  Take the Big Ten for example, a conference that opens the season with three teams in the Coaches Top 25 (#6 Ohio State, #8 Penn State, and #21 Iowa).

Fine, the Nittany Lions open with Akron – not exactly a blockbuster movie with shoot ‘em up action, I get it.  The Buckeyes have Navy – yeah, the Midshipmen will likely be sunk.  Meanwhile, the Hawkeyes have Northern Iowa – right, not the sexiest matchup on paper.

BCS implications – because a number of the prognosticators have the likes of Oklahoma, BYU, Boise State, Oregon, Oklahoma State, Virginia Tech, and Alabama, all in heavy contention for a BCS berth by season’s end.

When top-notch teams face off this early, some dreams could take a major hit, heck, just ask Clemson last season.  The result is a doorway for teams in the polls (like the aforementioned Big Ten trio).  The door is also open for other unranked teams such as Michigan State, Illinois, or even Minnesota.

This is your TV now, football fan.  Mowing the lawn can wait, are you kidding me?

I want you to park yourself in that leather chair.  Get an ice-cold beer.  Plant the remote in your hand, and no one else’s (especially THE WIFE).

Your time is now.

Turn on that HD channel and suck yourself in.  Put yourself there trampling through the grass, the mud, the rain, the snow – the elements.

I want you to grab your tailgate gear, toss it in your truck, litter the back of your car with school pride, and take off for the stadium. I want you to toss a steak on the grill, and cook it up until the neighbors salivate in unison around you.

This is your time, football fan.

Football is upon us, so get up off your feet and make some @#$% noise already!

Love football?  The Wife Hates Sports loves to write about College Football and the NFL!