The NBA Playoffs have reached the Conference Finals – and the dream match of Kobe vs. LeBron will once again not happen.  That’s ok, we shall press forward with a Caption Challenge anyway.

The Boston Celtics – with great defense and a fired up Boston crowd – eliminated LeBron James and the Cleveland Cavaliers with a series-clinching Game 6 win, 94-85.

So now that the Celtics have moved on and King James is going home – many will immediately ask the question, “What’s next for LeBron James?”

My answer: Let’s take our foot off the gas just a little bit.

It just happened, and certainly LeBron has a lot to think about heading into the offseason.

So instead of formulating an immediate opinion about LeBron James and his teeter-tottering relationship with the city of Cleveland, let’s instead take a softer side to what just happened – and at TWHS, that’s in the form of another caption challenge.

Certainly, in the upcoming days or weeks – I’ll have plenty of opinions and thoughts to add regarding NBA free agency, including King James himself.

But for now, let’s celebrate the fantastic performance of the Boston Celtics – who many left for dead headed into the postseason.

Well, except for the city of Cleveland – you get a hall pass.

As for LeBron, well… there’s this image from the past – which can certainly personify likely how James may feel at this time.

Here’s the image (below) – and here’s your chance to generate the most creative, funny, or unique caption possible.  Either that, or just pitch in your initial thoughts on the LeBron situation, the Boston Celtics, or the Conference Finals in the NBA.

Have at it, friends – and as always, thanks for reading The Wife Hates Sports! 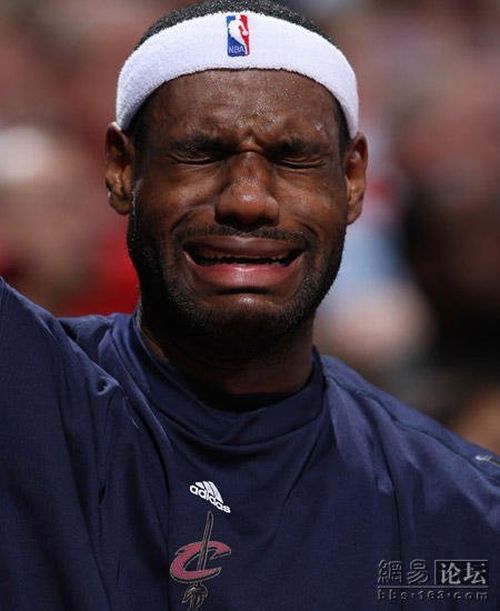 Thanks as always for visiting The Wife Hates Sports!